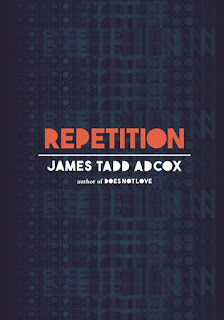 When writing my academic letters of interest, I almost always use a basic, self-made template. Within this template, there is a paragraph whose details shift—ever-so slightly—to strategically recalibrate this portrait of myself as an “academic.” With a few performative clicks of the keys, “selective liberal arts college” becomes “research institution,” the phrase “diversity” becomes “polyvocality,” and the name of some press or some magazine shifts to some craftily emphasized other. I am the puppet master of this bullshit theater of myself: hovering, pulling, snipping strings to my own dancing simulacra!
Such is the absurd performative tapestry of James Tadd Adcox’s Repetition, a devastatingly honest and humorous novella. Framed from the fictional but excruciatingly realistic perspective of an aspiring (untenured) Assistant Professor, Repetition follows his account of a conference dedicated to Constantin Constantius, the fictional performance of a real philosopher (aka the pseudonym of Søren Kierkegaard.) Herein, academia’s hierarchies, rituals, and unspoken rules of engagement are beautifully deconstructed, all within the context (as we later learn) of the narrator’s necessary recollection, his repetitive reconstruction of events.

Repetition’s narrator depicts his colleagues with scathingly precise, defensively derisive character analyses that reveal more about the observer than his subjects. His wife—whom he dismissively describes as a bitter “adjunct”—is “attractive, in a tall gangly way” primarily derived from her admission “that she had no idea, in particular, where to put her arms while she kissed [him].” His research assistant, Sandra (whom he suddenly realizes he is in love with,) is only lovely insomuch as her admiration for an (undeserving) other renders her so, a double of his wife who appears “tall and somewhat gangly,” until transformed by the frenetic, tearful, pacing power of her lovelorn energies. His arch nemesis—Constantius Society leader Professor Thomas Grinding—wears “a baseball cap even when…dressed in a suit,” hoping “for it to come off as a quirk or affectation, when in fact [trying] simply to hide that apart from the ponytail and some tufts of hair at his temples, he [is] almost entirely bald.” His secondary nemesis—the (married) object of Sandra’s admiration—is an insipidly casual “tenured half-wit” in “cut-off jeans and…Converses…two full sleeves of inoffensive tattoos” who probably includes “the name of whatever terrible band he played in on his CV.”
Worth noting, here: Adcox sneaks in some particularly sick burns related to others’ (imagined) CVs. He projects how the Constantius conference might appear on the CV of a posturing adjunct attendee, “what a sad little line, too: ‘Attended such-and-such conference.’ I wondered how many such lines his CV contained.” Worth noting, here, also: my (not yet finished) review of this book is already a line on my CV. It reads, “Repetition, James Tadd Adcox—book review—(magazine TBA), 2017.”
Adcox describes the hierarchical scrabblings of this Constantius conference with the kind of mad-grinning, gleeful incisiveness that can only come from one who has personally suffered through them. Repetition’s self-serious narrator—who obsessively analyzes his surroundings while remaining relatively un-self-aware—is the perfect vehicle for Adcox’s hilarious portraits of petty academic power dynamics. Take this restaurant scene, for example, wherein the narrator quietly duels with Professor Grinding (over the course of two pages) for the seat next to their privileged conference guest, Dr. Florantine:

Oh, what I would have given to have a spy in the room at that moment, to record the expression that must have crossed Grinding’s face as Professor Florentine walked past him on one side, I on the other, to take our seats at the far end of the table from him! His position so sure a minute ago—everything calculated exactly—and just as suddenly, defeat ! Crushing and total defeat! God, how his blood must have boiled! I, of course, I did not allow myself so much as a glance at his face as I walked by—this, too, part of my revenge, it was important that he understand how little his defeat meant to me, how dimly he shone in the light of my own success.

Amidst this atmosphere of scholarly competition, posturing, and performance anxiety, Adcox slyly guides the reader’s attention toward the details our narrator is too conference-obsessed to notice, suggesting his energies have long been diverted toward the wrong channels.
As his wife prepares him a celebratory breakfast and expresses her wish to attend the conference, he is consumed with irritation over the fact that she is awake earlier than usual, disrupting the repetition of his daily habit patterns. When these patterns are again disrupted by his sudden love for Sandra, the narrator physically represses his “confused” emotions: “I begin to stammer, my face turns red and I can feel it radiate heat…And the pain from my liver spreads throughout my torso in a series of dull, languorous throbs.” Within the text itself, Repetition’s narrator pushes his darker, subtextual reflections into that chasm all too familiar to thought spiraling academics: the footnote. In moments of extreme narrative duress, the inferior footnote text swells, howling to be heard, consuming the page.
As the biggest, deepest pool of the narrator’s misdirected efforts, the Constantius conference beautifully articulates those captive thought cycles, dually speaking in the words of the real Kierkegaard and his pseudonym Constantius, the real-fake Constantius and Adcox’s fake-real Constantius performance, the venerable keynote speaker Professor Florantine, and his recalled—recorded—voice (“The file for which, fortunately,” the narrator notes, “is still accessible via my personal email.”)

The voice of psychology says to the individual: No matter what you think your reasons may be, there exists a true, hidden reason for doing this thing, which can only be true so long as it is hidden and will be kept hidden so long as it is true. In this way psychology ultimately creates an entire other self to a person, which cannot be known, and if known, becomes untrue. Thus we find ourselves in an infinite regress: as soon as knowledge of the self comes into consciousness, it must be understood as a lie, based on some new, anterior self. To be conscious therefore is to lie, to have hidden reasons, to duplicate and to be duplicitous.

Thus, Adcox artfully outlines the circularity of Repetition’s dramatic evolution, developing our philosophical appreciation of its revelations before—and beyond—the narrator’s own understanding. Without revealing the surprise events of Repetition’s continuing “anterior” spiral, I will simply praise its remarkable ability to “duplicate and to be duplicitous” while creating something exciting and wholly singular in its sensation. (October 2016)

Reviewer bio: Meghan Lamb currently lives with her husband in St. Louis. Her work can be found in DIAGRAM, The Collagist, LARB, The Rumpus, Redivider, and other places.