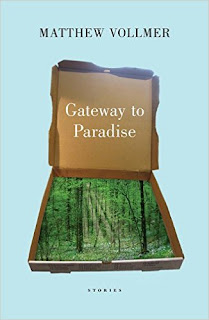 
Matthew Vollmer’s short story collection Gateway to Paradise is a gateway into lives veering off course, from a teenager unwittingly pulled into a homicide to a father struggling to keep his family together while under house arrest. Through their often surreal predicaments, the collection explores a universal dilemma in surprising and memorable ways.
In “Downtime,” a dentist tries desperately to move on from the death of his wife, who is not cooperating. In “Dog Lover,” a woman admits to a radio show host that she has more in common with her dog than her husband, and decides to put her theory to the test. In “Scoring,” a teacher is seduced by a nail-buffing woman at the mall while attending the AP readings miles away from his wife and family, only to find that what the woman wants goes way beyond a quickie in the fitting room.
All of the characters in the collection are stuck in the awkward space between the physical and sublime, and Vollmer’s deft and powerful writing drives this home. The dentist is haunted not only by his wife, but by “Mouths—where bacteria flourished, where puffy gums bled at the slightest touch, where teeth had been worn down to little eraser-sized nubs, and where incomprehensively fat tongues slapped against his rubber-gloved fingers.” At the same time, he confesses that mouths, “after all, had saved him.” In the title story, the main character finds a Happy Meal box “nestled like a gaudy temple among a bed of ferns,” only to discover “somebody’s turd” inside. She sees “Amish boys with bowl cuts fervently tonguing soft-serve cones.”
Through it all, Vollmer maintains a quiet humor that makes the stories deeply affecting. “Probation” is probably my favorite in the collection, largely because of the main character, Abe, who is trying desperately to keep his goth-dressing daughter on track while serving out his probation. At one point, Abe is fantasizing about his hero, a fugitive who is “serene and handsome and not un-Jesus-like, whom he admires for living on his own terms, even if they’re not “all that great.” In fact, Abe imagines:

The ground is rock hard beneath his back, and even if he has an inflatable mattress in whatever cave or lean-to he’s hunkered down in, he’s never one hundred percent comfortable, never gets more than two hour’s sleep at a time. And tonight, Abe sees, he’s wet. And cold. And miserable. His squirrel traps are empty. He ate his last handful of trail mix the day before, hasn’t eaten a thing since.

In Gateway to Paradise, “relief and satisfaction” are “short-lived,” and paradise is “a secret communal place” that feels out of reach. What remains is us, the awkward creatures at the gate, a fugitive savior with empty squirrel traps, fresh out of trail mix. It’s a beautiful collection—sensitive, carefully observed, and artfully written. (October 2015)

Reviewer bio: Elizabeth Gonzalez’s debut story collection, The Universal Physics of Escape, won the 2015 Press 53 Award for Short Fiction. Her short stories have received the Howard Frank Mosher Prize and the Tusculum Review Prize and have appeared in Best American Nonrequired Reading, New Stories from the Midwest, SolLit Selects and numerous literary journals. She works as a freelance writer and editor in Lancaster, PA, where she lives with her husband and two daughters.