Review of Christopher Kang’s WHEN HE SPRANG FROM HIS BED… 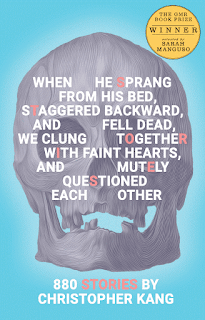 WHEN HE SPRANG FROM HIS BED, STAGGERED BACKWARD, AND FELL DEAD, WE CLUNG TOGETHER WITH FAINT HEARTS, AND MUTELY QUESTIONED EACH OTHER

Despite or because of their brevity, the 880 tiny hard-to-categorize pieces that fill these pages demand our attention. With shifting POVs and a hybrid blend of poetry and prose, the pieces (which are titled by number) contain a range of the unattainable where feelings and acts are often represented as objects. Confusion, for example, is a tangible thing to be left somewhere, and a confession can be pried open and explored. In “538”, “He uncovers in the crisis a smooth and flat layer of apathy.” Kang’s superb writing lends a real physicality to human experience, bending and enhancing the reader’s perception. Longer pieces, though no single piece ever fills a page, allow for a broader range of movement, as in “15” which begins with a sudden death and then ends with an image of a severed hand providing nutrients to a plant. Recurring themes such as loss—violence and the suggestion of violence abound early on—and memory are depicted, often beautifully and with great surprise. “457”: “After her death, he stands naked in front of the mirror and imagines she is hiding behind him.” While each piece exists as a standalone, Kang’s slow and careful tone provides cohesion, his words shining spotlights down hallways of self, showing how we learn, fear, and build. These pieces are sharp verses in a song of shape and motion, of the making of human moments, of the setting and spirit of human lives. Categorically elusive, this stunning work is best known by experiencing it. “64”: “He lies motionless in the rain. A train approaches and roars. He is dreaming of everything.” (February 2017)

Purchase When He Sprang From His Bed... HERE.

Reviewer bio: Mel Bosworth is the author of the novel Freight. He currently serves as an associate editor for The Best Small Fictions 2017. Visit him at melbosworth.com