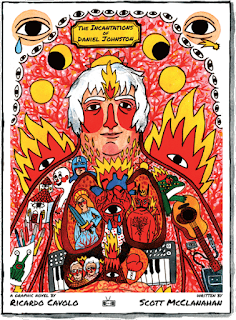 The Incantations of Daniel Johnston

The other day I saw a documentary on Darius McCollum, a man with Asperger syndrome who’s been imprisoned nineteen times for impersonating employees of the New York City Metropolitan Transportation Authority (MTA). McCollum had no malicious intentions with these MTA impersonations, he just really, really wanted to conduct buses and trains. Since he was a kid, McCollum has been obsessed with the landscapes of rails and roads, the experience of moving from one space into the next. He’s memorized schedules and maps, “borrowed” uniforms, practiced and mastered the language of a world which, for him, is magical. For McCollum, the world of transit is so magical its wonder overshadows all threat of arrest, overpowers all self preservation.
His mind makes this world so beautiful: channels of movement and bodies and sound wherein everyone has a place and a role and each thing is connected.
His mind makes this world so dangerous: tunnels of darkness, desire so powerful that he repeats his mistakes—taking crazy risks—just to be part of it.

This kind of doomed, obsessive desire rings through The Incantations of Daniel Johnston, a graphic novel by Ricardo Cavolo and Scott McClanahan. The book explores the life of musician Daniel Johnston, his struggles with bipolar disorder and schizophrenia, illustrating the highs of his artistic achievement, and the lows of dark, paranoid voices consuming him. Through their commingling of words and images, Cavolo and McClanahan examine the uncanny spaces of Johnston’s experience where the real and imagined worlds collide, where his narrative absorbs not only Johnston, but the reader as well.
Cavolo and McClanahan are well aware of this possessive power, and they both set out—in their own ways—to warn us. In his preface, Cavolo remarks that “Daniel Johnston is an actual person, with real-life joys and sorrows, but his life reads like a novel.” McClanahan’s warning is more direct, more dire: two bold sentences surrounded by the silence of entire pages. “Beware: I don’t think you should read this. I’m warning you.” Then, on the next page—our last chance to escape—he divulges, “There are devils inside.”
And there are devils inside, tons, both literally and figuratively, among so many other things. Every page of artwork is filled with explosions of bright, chaotic energy. Scenes bleed into one another, ornamented with eyeballs and hearts, suns and frogs, skulls and flames, rainbow showers and tears, the imaginary melding with the real. Having worked in art programs for adults with mental illness, these uncanny landscapes feel very familiar to me. I have no doubt that if Daniel Johnston were to make a graphic novel of his mind, it would look a lot like Cavolo’s art. 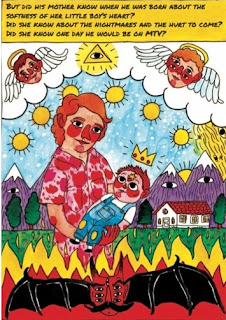 The art also performs in many different ways. Sometimes, it takes the form of a scene: 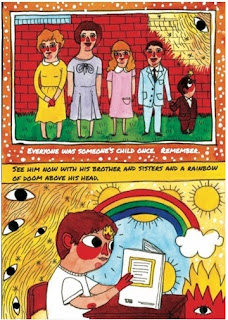 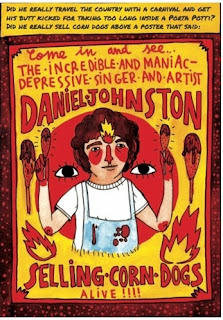 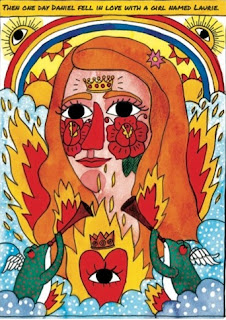 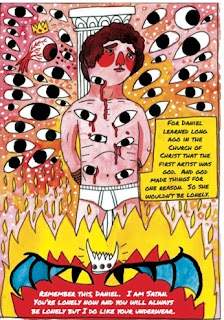 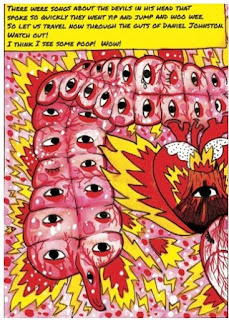 And sometimes the art ventures not only into the depths of Daniel’s mind, but his body as well.
I’m not sure whose idea this was—Cavolo’s or McClanahan’s—but it definitely makes an immersive story, a book with the ability to venture anywhere around and within Daniel Johnston. Also: it’s funny as hell.
In its own very different way, McClanahan’s narration is equally fluid. His voice—deceptive in its direct simplicity—is an apt contrast to Cavolo’s chaotic imagery which acts as a skillful, insinuating guide through the graphic novel’s mind. He moves seamlessly between the modes of third person storytelling, performative addresses to Daniel (as the demons in his head), and direct addresses to the reader, usually warning them that the many demons possessing Daniel will soon possess them, as readers/viewers/listeners. As he puts it so well: “…everyone who makes something is only saying, ‘Hi! How are you? ’and also: ‘BEWARE.’” 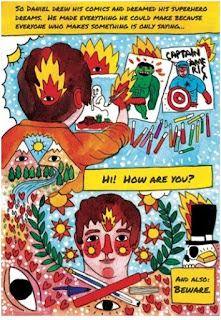 Through the dual framing of art and memoir, word and image, Cavolo and McClanahan narrate the mind’s duplicity (both ours and Daniel’s). “Daniel Johnston is an actual person, with real-life joys and sorrows,” but, after all, his life—when read—“reads like a novel.” His life is equal parts lived and imagined, as are own are, as this story is, and as our understanding is, as per this story: reeling and careening, full of contradictions, joys and sorrows, climaxes and endings, all of which are dubious.
On the one hand… 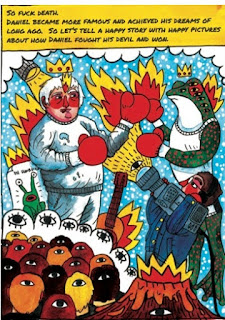 But, on the other, we are definitely damned, possessed by writing, art, and music demons that will haunt our lives and memories forever! This is bad, right? We should be afraid, very afraid. As this triumphant image announces: 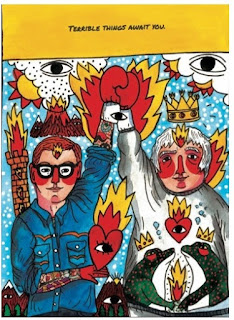 Reviewer bio: Meghan Lamb currently lives with her husband in St. Louis. Her work can be found in DIAGRAM, The Collagist, LARB, The Rumpus, Redivider, and other places.