Review of Christina Seymour’s FLOWERS AROUND YOUR SOFT THROAT 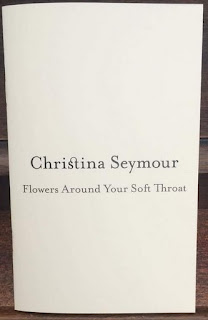 Flowers Around Your Soft Throat

The ten poems in Christina Seymour’s debut chapbook, Flowers Around Your Soft Throat, raise everyday suburban life to the level of the sublime using alliteration, neologisms, and a rich palette of literary and artistic references.

Seymour, who teaches creative writing at Maryville College in Tennessee, built this collection on the scaffolding of “A Song of Loves,” her prize-winning entry from Structo’s 2014 psalm contest. An imitation of Psalm 45, the poem transmutes the psalmist’s effusive praise for the Hebrew king into a celebration of domestic life with a partner: “Your garments smell like our years— / open dresser, quiet nights”. The psalm’s opulent language mostly appears here in the negative—“My hairbrush is not ivory or gold”—and in gentle denials of the psalm’s directives to forget ancestors and focus on offspring. Rather, the poet moots the possibility of self-regeneration without procreation: “Instead of my parents, we will be the children / whom we remake and remake for each earth, each time.”

Several other verses are inspired by the visual arts: Rothko (“It’s not a void if it’s your own heart,” in which cozy vocabulary is overlaid on negative emotions—“hearths for each sadness, each pearly moment of need”), a Chinese silk design (“Loquats and Mountain Bird,” where released birds are a metaphorical counterpoint to the necessity of dealing with a loved one’s illness), and Dante Gabriel Rossetti (in “We, the Painted,” real life contrasts with the idealism of the image, and the narrator finds herself forced into a mold by another’s gaze).

Even in poems not explicitly modeled after works of art, though, the strength of Seymour’s imagery is remarkable. She paints “the lemon-rind edge of the moon” in “Lack of Grace”; the tumble of autumn leaves in “Fall, the Redoing”: “yellow and lime green flirt, like an injured bird, until flaking off to mulch.”Ordinary phrases are lifted into profundity by one unexpected word, like the choice of a dreamy verb over a functional one in “my hound swirled between my legs.” Neologisms take the form of compound words: “being-with-you,” “out-the-window,” “not-needing-to-know,” and “not-to-say”—concepts that a language like German surely has a single word for.

The sonic unity in Seymour’s free verse comes from within-line rhyming and alliteration. Hard sounds are balanced out by sibilance in a snippet like “cicadas send clicks,” while the four-fold assonance in “a parade of brave raindrops on the pane” augments the internal rhyme to produce an enchanting rhythm in “Hope Naturally Follows Morning.”

Here Seymour gilds autobiographical fragments with universal significance. She leads a breathtaking emotional tourwithout straying far from the foot of the Smoky Mountains. Family and romantic relationships provide succor yet are always a potential locus of sadness.Nature and art,the poetproposes, are methods of transmuting this inevitable grief: “We ask any surprise rain shower to teach us how to weep” as we recognize “the tiptoed silk of a relative dying.” Readers will be eager to encounter Seymour’s fresh images and ekphrasis in a full-length collection. (September 2016)

Reviewer bio: Rebecca Foster, an American transplant to England, is a freelance writer and editor. Her book reviews appear in the Pittsburgh Post-Gazette and Foreword Reviews, among other print and online locales. She also blogs at Bookish Beck.