Review of THE BEST SMALL FICTIONS 2016 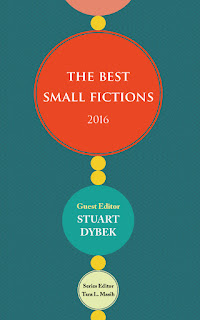 Best Small Fictions 2016 collects 45 super-short stories that stand out for their structure, voice, and character development—all in spite of often extreme brevity. Together they cover a huge range of subject matter and occupy various points on what editor Stuart Dybek, in his introduction, calls a “continuum of infinite gradations that spans the poles of fiction and poetry.”

The opening story, Rosie Forrest’s “Bless This Home,” is an example of just how much can be achieved within a few pages. The prose, echoing Daniel Woodrell, evokes a hardscrabble country existence wreathed in woodsmoke. The teen narrator’s no-nonsense speech quickly establishes her in relation to her mother, her mother’s pretentious boyfriend, and the bearded tenant down the hill. “When something is forbidden, the four winds conspire like a pack of wolves,” she confides, setting up for the terrifically transgressive final paragraphs.

Point-of-view is crucial in small fictions: it must be established immediately, and it helps if it’s an unusual perspective—like that of a Venus flytrap observing a household’s upheavals (Janey Skinner’s “Carnivores”), or of potential names gathering around a baptismal font (Alberto Chimal’s “The Waterfall”). Sometimes a concrete identity isn’t necessary, though: when James Kennedy’s “World’s Worst Clown” fails to cheer a dying five-year-old,  readers learn no more about the narrator than that s/he takes the clown home from the hospital and sleeps with him. David Naimon’s one-paragraph run-on, “Past a Roar Completed,” uses dialect and neologism to craft a strong voice even though all we know is that these characters are in a boat, taking a different route to normal down the river.

Humor and pathos provide sharp pivot points. Amelia Gray’s “These Are the Fables,” for instance, catalogs an amusing litany of strikes against the central couple, not least that the narrator announces her pregnancy just as she and her partner are escaping a burning Dunkin’ Donuts. Likewise, Paul Beckman’s “Healing Time” strikes a balance between somber and witty in its depiction of dysfunctional family members who aren’t speaking to each other;even meeting at the matriarch’s deathbed can’t trump old wrongs and feuds.

Hard as it is to choose from such a diverse bunch, I do have three favorites: Elizabeth Morton’s “Parting,” in which a divorce causes everything to be literally divided—“It was half good … I was half-impressed”; Mary-Jane Holmes’s “Trifle,” where alliteration and culinary vocabulary contrast an English summer with Middle Eastern traces; and Amir Adam’s “The Physics of Satellites,” which uses images from astronomy and a recent family suicide to contrast falling, flying, and barely holding on.

This annual collection of the finest flash fiction is in its second year. There are fewer highlights than in the previous volume, but this remains an excellent snapshot of contemporary short-short stories—with the welcome addition of a few in translation. “Learn to love specificity,” Megan Giddings advises in an appended author interview, a tip that will benefit readers as much as writers. You’ll love these specific scenes and voices in all their variety. (September 2016)

Reviewer bio: Rebecca Foster, an American transplant to England, is a freelance writer and editor. Her book reviews appear in the Pittsburgh Post-Gazette and Foreword Reviews, among other print and online locales. She also blogs at bookishbeck.wordpress.com.