Review of Vanessa Hua’s DECEIT AND OTHER POSSIBILITIES 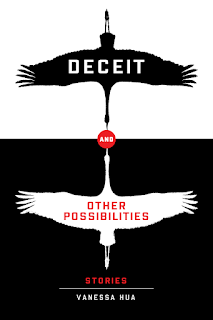 Deceit and Other Possibilities is Vanessa Hua’s debut collection of ten, tightly themed short stories. Each story’s strength stems from its well-developed characters. Characters that differ in terms of temperament and position all have a purpose in common: the betterment of self and circumstance through migration. Whether it is the Korean-American pastor, the Hong-Kong movie star or the Mexican boy whose Father crept across the border, there is a continual sense of unrest and striving from all sides as these families and individuals alike face the challenges of trying—with limited success—to immerse themselves into a new America.

I didn’t know then that my kind charmed in Asia: someone who looked Chinese but spoke and carried himself like a Westerner. The American exotic – beach lifeguards, football, cowboys – made accessible through us. We were chop suey, orange chicken, egg foo yung, Chinese yet not, American and yet not.

There are reoccurring themes here, such as betrayal, manipulation, family pressure, redemption, and, of course, migration. In fact, at first glance, these would appear to be little more than migration stories, but immigration is a mere platform which Hua uses as a foundation to examine sacrifice, struggle, and, ultimately, self-discovery.

Her parents wanted Lin to return to China. The economy was booming there while her future in Silicon Valley was uncertain. Even waiguoren, foreigners, were flooding into China to make their fortunes.

Regardless of a person’s background we all know what it means to succeed and to fail. And that is the essence of these soul-searching stories. With clarity and precision, Hua uses cultural and generational differences to illustrate our over-riding human commonality.

Were people also one way or another in terms of temperament? Some were rude, some polite, some flamboyant, others bookish – it was in their nature. Biology was fate.

(“The Responsibility Of Deceit” page 72)

Vanessa Hua’s style is easy and smooth. She reveals the true nature of her characters slowly, giving the reader time to get to know and ultimately empathise with even the most ill-intended individuals. Deceit and Other Possibilities is a collection where agendas lurk and intentions are hidden. It is at times humorous and always relevant in its insight into cultural identity,  and it is an identity that almost breaks under the author’s well executed scrutiny. Traditions are honoured and ignored and heritage is as much a blessing as it is a curse.

When Chinese first arrived in America to tunnel through mountains for the railroads and snatch gold from rivers, most were men. Though few fortune-seekers intended to settle, laws also barred most Chinese women, to prevent families from taking root.

Here is a book where a very specific set of people bare up under truly unique circumstances to show that the individual’s problems are universal. Wherever we come from and wherever we are going, we all have human frailty in common. (September 2016)

Purchase Deceit and Other Possibilities HERE.