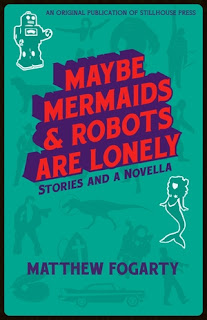 Flash fiction can be a tough thing to get right. Too little information, and the stories are fragmentary, leaving the reader adrift in the world created by the author, wondering what could’ve been. Too much and, well, it isn’t flash fiction. Matthew Fogarty’s debut flash collection, Maybe Mermaids and Robots Are Lonely is the perfect balance between the two. The stories are tight, the word choice on-point, and hardly ever are you left lacking at the end of a piece.

The title story is, in short, like Wall-E, but better. Fogarty makes us feel for both of these characters, the mermaid and the robot, in ways that Pixar wishes they could. Sure, there isn’t a Randy Newman song playing in the background, but that’s what Spotify is for if you really wanted it. The story is a love story, but it also deals with what many of the stories in this book—pieces filled not only with mermaids and robots, but Princess Zelda and zombies, and a whole cast of others—deal with: possibility. “Wherever it is they find each other, he has to believe in the possibility, because if this isn’t possible, what is?” This is the heart of this book, it seems, as in story after story, Fogarty grapples with what it means for something to be possible. What, in this world, can be real, can be believed, and what can be made to be believed.

In some stories, video games and pop culture take the reins, while in others, Fogarty plays with cultural myths and legends, incorporating these ideas into more realistic settings. In “Bigfoot’s Overcoat”, a temp records clerk who is called Bigfoot by his coworkers at a law office becomes the center of attention at an office happy hour when he starts spilling secrets. The big, quiet man who was so much a confessor for the office suddenly drunkenly shouting what everyone thought would be kept secrets. After that night, though, with everything laid bare, he disappears. “We haven’t seen Bigfoot since that night…Every once in a while, there’s a sighting around town, though these are usually second or third-hand reports.” Everything and everyone, to Fogarty, can be humanized and related to, no matter how mythical.

The center of the book, a novella titled “The Dead Dream of Being Undead”, is one of the few plays where the book seems to falter. The story feels out of place compared to the flash pieces, especially when it feels at times like Fogarty is trying to use the same techniques that make his short shorts work so well in a longer format. They work, to an extent, but overall the story feels stilted in a way that the rest of the book doesn’t.

With thirty-five stories packed into a little over two hundred pages, Fogarty manages to deliver a lot in a series of small, wonderful packages. (Sept. 2016)

Reviewer bio: Sam Slaughter is the author of the chapbook When You Cross That Line and the story collection God in Neon. He's the spirits writer for The Manual and currently lives in South Carolina. He can be found online at www.samslaughterthewriter.com and @slaughterwrites.