Review of Lex Williford’s SUPERMAN ON THE ROOF 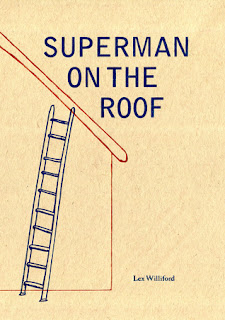 Superman on the Roof

The best connected story collections work on two levels. The individual stories stand alone, leaving you satisfied and thinking. But when linked together, they are even stronger, calling back to previous stories, answering previous questions, and offering new ones. Lex Williford’s Superman on the Roof, winner of the Tenth Annual Rose Metal Press Short Short Chapbook Contest, offers this connectedness in concentrated form. The novella-in-flash is comprised of ten stories, each 1,000 words or less. Through great economy, Williford tells the story of loss, grief, and the cycle of violence one family endures. Each short is narrated by Travis, the oldest son of four growing up in 1960s Texas, and each deals with the death of the youngest son Jesse. These are not stories of his death but of the days and years after, full of the sucker-punching details of family life made harder by the death, which is always present and never addressed. It’s these vivid moments that make the collection stand out. Children running naked from their kiddie pool into the street to please their father.
Travis shouting “I can see all the leaves on the trees,” after receiving his first pair of glasses, showing us how a child matters in the midst of a tragedy, in the midst of not mattering. We see the parents’ misguided grief in the “good, green switch from Mrs. Sauerwein’s willow” picked by a child for his own punishment, and in the swoosh of a father’s belt before silencing the apology his son waits up to give him. We see the cycle of violence, the way adults hurt children for the purposes of education, character-building, and their rage. We then watch the children hurt each other to express their power. Throughout the book there is a constant eek of blood, the loss of which killed Jesse, seeping out of punched noses and lashed ankles. But bubbling underneath the violence is the love the family feels, which they can’t express through words so must express through action. While the very last story in the collection ties things together a little too neatly, comes to overt psychological conclusions that took this reader out of the narrative, the overall collection is riveting, especially in the absence of this kind of commentary. It’s strongest when we come to conclusions ourselves. When we see for ourselves the family’s wrong turns and, just when we need them, the right ones. (August 2016)

Purchase Superman on the Roof HERE.

Reviewer bio: Christy Crutchfield is the author of the novel How to Catch a Coyote. Her work has appeared in Tin House, Mississippi Review, Salt Hill Journal, Juked, and others. Visit her at christycrutchfield.com