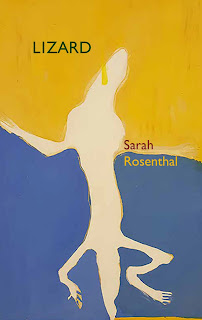 Lizard stalks
images so vivid
they cut. A
friend in fuschia
saying let’s try
a new process.
(Lizard’s wearing
orange, it
compliments her
natural green.)
We’ll argue. (It’s
more elaborate but
that’s the gist.) It
will make our ideas
better.
I like the
streaks on you,
tour toned
commitment

Bay Area poet and editor Sarah Rosenthal’s second full-length poetry collection, following Manhatten (Spuyten Duyvil, 2009), is Lizard (CHAX Press, 2016), a sequence of untitled, short-lined lyric sketches that accumulate into a book-length suite. Deft and quick, the poems in Lizard allow Rosenthal such speed and accuracy in movements both small and sweeping. As she writes: “I eat my sister. No / one cares because / we’re not pronouns, / says Lizard. We’re / not names. I’m not / Lizard and this is / not a magic act. This / is real, tongue so / long and muscular, / toes scaling verticals, / third eye parietal [.]” Utilizing the lizard as part character and part spirit-animal for the poems, she is able to write through fact, fable and metaphor, held together through a central figure that, as she writes:

Mostly eats the living.
On account of her
eyes. They see what
moves. She stalks
the world nude, I
want to say reveals
the world’s nudity.
Want to say, we’re
all that emperor.
that lonely thing
with mirrors