The Future as Past: Review of Tara Deal’s THAT NIGHT ALIVE 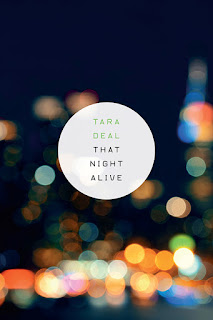 In the iconic ending to The Great Gatsby, Fitzgerald writes, “So we beat on, boats against the current, borne back ceaselessly into the past.”  In That Night Alive, the future quite literally becomes past, as the primary narrative—a woman facing her impending death in an unnamed dystopian future—moves backwards through a series of journal entries from December 24 to a year earlier, November 20.  We begin with the narrator’s mysterious disease that has a specific death date of December 25, then we move backwards to her travelling to cities like Tokyo and Paris, her move to a luxury tower apartment in New York City, her job as a crypto-reporter, and all the way back to her struggle as a young writer, moving from city to city and from one crappy apartment to the next.  While most of the journal entries are quietly introspective, they are peppered with references to the world in which the narrator lives, including the shadowy governmental figures who intercept her for the task of crypto-reportage; the various foods and activities that are banned, like croissants and novel-writing; the most recent outbreak of disease number 28; and the occasional poison wafting through the air.  Although these details create a pleasant sense of atmosphere, the primary narrative thrust is the protagonist’s desire to create something of lasting importance and beauty before she dies.

Juxtaposed against these diary entries are short flash fiction vignettes the narrator refers to as her micro-memoirs, a creation not explicitly banned but likely not tolerated either.  These memoirs explore the nature and limits of art, especially in such a 1984-esque world of unceasing surveillance.  Each one is referred to as a ‘Paint Chip,’ with a color-specific title like Cappuccino, Pink Marble, or Cosmos.  The narrator mentions that changing the wall color of her apartment is forbidden, but she keeps paint chips “as many as [she] could carry, because they are free, at least for now, and you never know what might happen, when you might need them.”  These vignettes paint a colorful and vivid portrait of a moment captured in time, like a water droplet poised forever on the cusp of falling.  They are the narrator’s “mnemonic devices, for remembering what living here is like.”  On the one hand, these micro-memoirs speak to the power of art to make permanent what is transitory, like two lovers on a Grecian urn or a Shakespearean sonnet (so long as men can breathe or eyes can see/so long lives this, and this gives life to thee.)  On the other hand, they question their own longevity along with their significance.  We are no Keats, after all.

The entire novella operates on a micro scale—the closer we get to an object, the more sharply it comes into focus, but as we glance out the window at the world around us, it blurs and takes less definitive shape.  This is even foreshadowed by the cover, a blurred-out series of colorful dots on a black background, reminiscent of a city at night.  Partly this is achieved by the author providing less concrete world-building detail, but is also achieved by the authorial voice that often utilizes passive voice; shorter, declarative sentences stacked together; abstract, rhetorical questions; and vague pronoun-only references to a shadowy ‘they.’  All of these choices create a consistent voice and psychology, a sense of what it is like to live in this world, to give up certain artistic ambitions for safety and comfort, without having to delve into tedious backstory.  The one stylistic choice I had mixed feelings about was the choice to begin each section with a word or phrase that ended the previous section.  While this created some lovely juxtapositions and a clear sense of rhythm and movement, it did occasionally come off as a bit gimmicky.  However, this is a small disclaimer for what is ultimately a tightly written and successful novella. (September 2016)

Reviewer bio: Melissa Reddish is the author of The Distance Between Us (Red Bird Chapbooks, 2013) and My Father is an Angry Storm Cloud: Collected Stories (Tailwinds Press, 2015). Her stories, poems, and reviews have appeared in print and online journals. She teaches and directs the Honors Program at Wor-Wic Community College on the Eastern Shore of Maryland. When not writing or teaching, she likes to do stereotypical Eastern Shore things, like eat crabs smothered in Old Bay and take her Black Lab for long walks by the river. Girl & Flame, a hybrid novella, is now available from Conium Press.