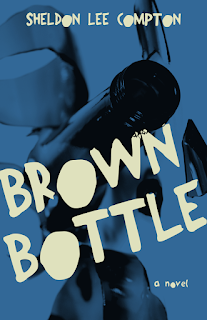 In Sheldon Lee Compton's debut novel, Brown Bottle, we are immediately introduced to our protagonist - and on occasion antagonist - Wade Brown-Bottle Taylor, a complicated man whose contradictory nature reflects the opposing extremes found in his Appalachian region of eastern Kentucky, a place of vast loneliness, natural beauty and man-made madness.

The only aspect of life closer to Wade's heart than the warm buzz of hard drink is his somewhat fragile relationship with his nephew, Nick. Upon discovering his nephew's increasing appetite for pharmaceuticals, Wade Taylor takes it on himself to intervene, a decision that sets him off on his own redemptive path. And it is a pathway paved with deceit, betrayal and blood.

While Wade faces problems typical of poverty-stricken Appalachia, in many ways he is a portrait of everyman. His battle is a familiar one as he struggles to make sense of the world around him, and, more importantly, his part in it.

All of the novel's characters are affected, in one way or another, by poverty and addiction. Perhaps none more so than Tucker, Stan and Hen, an unfortunate trio of predatory types who, through multiple twists and turns of plot, switch from predator to prey as the story unfolds.

Through Wade and Nick's story we are taken along avenues of the addictive personality that run far deeper than mere cognitive dissonance. Here is a novel that thoroughly investigates the limitations of good intention.

Despite its rather bleak subject matter the book has a definitive line of hope running all the way through. Compton writes about addiction with remarkable insight. He captures the comforting highs and the humiliating lows with an equal measure of subtlety. But this is not a drug story. Addiction is an underlying theme which serves as a foundation for this compelling story about community, family and love. Brown Bottle's community is broken, probably beyond repair. The families are also broken, or at least, irreparably damaged by the weight of inherited circumstance. But underneath the mess of it all, there is an irrepressible sense of hope and a defiant, driving force of love.

Compton is an author whose art imitates life. A writer who understands the importance of portraying beauty and brutality in literature. A novelist who appreciates the elasticity of the defining line between right and wrong. If the artist has any kind of responsibility, then surely it is to start a conversation, ultimately by asking more questions than it answers. That is exactly what Brown Bottle will do. (February 2016)

Reviewer bio: Matthew J. Hall is a UK writer based in Bristol. His poetry chapbook, Pigeons and Peace Doves, is available through Blood Pudding Press. His short stories have appeared in The Literary Commune, Red Fez, Lotus Eater and several other anthologies. He reviews small press books at www.screamingwithbrevity.com