Review of Hasanthika Sirisena’s THE OTHER ONE 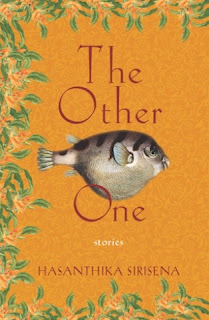 I’ll be the first to admit that I am mostly ignorant of the Sri Lankan civil war. Everything I know about Sri Lanka comes from reading works by Michael Ondatje, and, more recently, Nayomi Munaweera (whose debut Island of a Thousand Mirrors is an absolute must read). Hasanthika Sirisena’s story collection The Other One did not bring me any closer to understanding the facts behind the Sri Lankan war. It did, however, open my eyes in an astonishing, brutal way. With an absolute, unflinching drive, Sirisena’s stories both elucidate and explore the vestiges of the war and, most importantly, show how everyone who is touched by such violence is a survivor.

The Other One is not a ‘feel good read’ and I doubt Sirisena meant it to be. Each story examines characters who have felt the effects of war in some form or fashion. From third country nationals working in Kuwait to grandmothers struggling to help their families come into the modern age, these characters all move within the shadow of sorrow and violence.


It is not the subject matter, however, but the way it is skillfully explored that makes Sirisena’s collection so powerful. Her characters are complicated and their situations messy. Oftentimes, as is the case with Anoja in “War Wounds”, there is a transference back and forth of pleasure and pain that refuses to be simplified. Characters such as Anura in “Third Country National” at first elicit sympathy from the reader, but as layers are peeled back it is revealed that no one is pure, no one is innocent, and the reader is dragged into even muddier waters where questions of shame, blame and guilt abound.

Even in stories with a seemingly lighter premise, such as cricket matches in “The Other One”, the trauma inflicted by the war is never quite forgotten. Unsettling moments are always hinted at and the reader is never able to forget that each character has been scarred, each tale is a war story of some kind. So, no, Sirisena’s collection is not easy to read, it is not comfortable, but it is necessary. The Other One is essential reading both in trying to understand the Sri Lankan civil war and, more importantly, in trying to understand both the bleakness and the brightness of humanity. (March 2016)

Purchase The Other One HERE.