Review of Leora Fridman’s MY FAULT 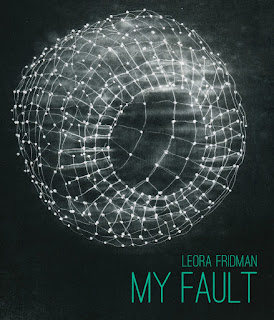 Leora Fridman’s poetry unveils an exposé of small instances that compose the idea of fault. The title itself is enticing – making the reader wonder what Fridman’s words might reveal. Is she confessing something, or is it something greater than that? It seems as though both of these questions are valid when reading My Fault. The ambiguity of several of the poems allows the reader to ask these questions, perhaps leaving without an answer. This vagueness is perpetuated through almost all of the poems through her simple use of language and sentence structure – most words do not require a dictionary at the ready, and the short sentence keeps the pace steady.
One of the most poignant poems within this collection, due to its construction as well as its connection to the title, is “The Awning”:

I’ve roped myself
Out of another one.

I’ve left my favorite dress behind.
The way we move from crash to crash

Is like springing beasts, and I can’t take
Credit for the forward march.

“I can’t take credit” lends itself to this idea of fault or lack thereof. Fridman connects with her readers, imparting upon them her innermost thoughts of what it means to harbor guilt, fear, and longing, without giving them all the answers.
She bears her thoughts for her audience, refusing to hide behind perceptions. She embodies her actions, owning them, saying they are her “fault”. She is not really getting at the idea of her being wrong, but rather her ownership over herself, and her outspoken voice, taking that ownership. Through the collection of poems there is a sense of self-actualization and explanation. No one other than the speaker can explain herself, her actions, her faults. Now, while the speaker may not explicitly be Fridman, it seems as though she is a vessel or vehicle for the author’s thoughts. The speaker has authority and credibility in this proprietorship.
My Fault ends with a revelation of the speaker’s actions, concluding with the ultimate result of claiming a fault. Fridman writes, “I went for the blaming/& found there more embrace”.  Claiming a fault, as the speaker has done, shows more character than hiding behind the names of others. It goes beyond following the stream, and plunges into the idea of growing into your skin and telling the stories that plague your mind. (April 2016)