Review of Amina Gautier’s The Loss of All Lost Things 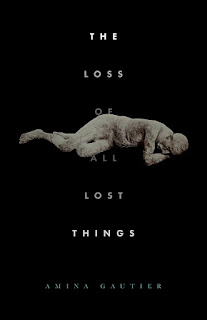 
Every loss is “a reprimand,” a “disorienting thing,” a character reflects in Amina Gautier’s collection The Loss of All Lost Things. Whether it’s a birthday card with a ten dollar bill taped inside or the loss of a child, every loss drives home our “helplessness” like a “little death.”

In the title story, a mother and father whose son was taken on his way home from school struggle through a year of searching and waiting. They wrestle with terminology, preferring “lost” to the “proper word” which “makes it all too real, makes them dread instead of hope.” This is all the sadder since their son, narrator of the first story in the collection, “Lost and Found,” is wrestling with the same question. The boy is living out his parents’ worst nightmare, locked up in a hotel with a character he calls Thisman who abuses him sexually. The boy knows that he is “lost, but not in the way he had been taught to be.” Like his parents, he concludes that he “prefers the word lost instead of taken. Lost is much better. Things that are taken are never given back.”

For his parents, the reprimand follows swiftly. Guilt drives them into separate beds, and blame becomes “the glue that keeps them together.” It is so mighty they must “shuttle it between them, neither one able to shoulder it alone.” They refrain from loving their younger child, feeling it’s “not fair.” They preserve their son’s toys untouched on the floor where he left them, awaiting his return. When their younger son disturbs them, his mother crawls across the floor, repositioning them in situ, exactly as they were when disaster struck.


In “Been Meaning to Say,” a grandfather, Leslie, is lost after the death of his wife. As he waits to see whether his daughter will show up for Thanksgiving, he recalls the month he waited after his wife’s death before moving her slippers. Finally he’d carried them, “one in each hand as if to prevent each slipper from knowing its fate,” into the master bedroom. “He knelt by Iphigenia’s side of the bed and placed them there. She needed only to return, slide out of the bed and slip right into them.”

Like many other characters in the collection, Leslie has lost his child in a more ordinary way. Leslie watches a family inspect the home attached to his. “Don’t buy it!” he wants to shout. “Don’t buy this house for them. They will grow up and they will leave it. They will leave you. They will scorn what you have saved for.” In “What’s Best For You,” a woman working in the university library blames herself for her daughter’s forward ways and knowing attitude; in another story a divorced mother is locked in a battle with her ex to win the favor of their only daughter.

Many characters struggle with the weight of their choices. Sometimes they’re looking to escape a sense of unreality that comes from the privilege of having too many. In “Directory Assistance,” a graduate student abandons her studies after a bad breakup to come home and work as a phone operator. She seeks solace in Howard, a company trainer she admires because he “was born to work for the telephone company.” She emulates the women on the train who can lose themselves in romance novels, hoping to “feel real again.” Usually, though, the choices are too few, as in the case of Sona, a woman pregnant with twins who are battling for an equal share of blood. As she contemplates a surgery that may force her to choose one child over the other, she shuttles the weight to her solicitous husband in a single, devastating word: “Choose.”

In “Cicero Waiting,” a classics teacher is ducking his wife because seeing her triggers thoughts of their daughter, who was snatched nine months before when he turned away from her at a local Target. He has been waiting ever since for his wife “to do the leaving.” He is tired of “waking up each day wondering if it will be the one where she finally understands what he has done.” He does not want forgiveness. Pompeii, he reasons, “couldn’t be saved.”

The problem for all of the characters is how to handle “the living that muscles through”—how to move forward, how to manage the guilt and the blame, whether to grieve or hope, when it’s time to just give up. How to simply go on waiting when even those meager choices are not on the table.

Sometimes, they manage a way forward. Sometimes, the best they can do is to pay attention, as the narrator in “Most Honest” discovers. “From now on I will be vigilant,” he decides. “I will keep watch over all that I can ever have.” Some characters must learn to “let go.” Yet others find a way to begin the “excavation,” the long dig up and out. Some even find “sanctuary.” Often, it is back where they started, in the arms of the one they’ve been pushing away.

The stories provide a compelling, intimate journey through losses that feel familiar even when they are inconceivable because they feel so true. They make a good argument for mustering the will to “muscle through”whatever the day brings, and “keep watch” over those things you can claim, no matter how diminished. (February 2016)

Purchase The Loss of All Lost Things HERE.

Reviewer bio: Elizabeth Gonzalez’s debut story collection, The Universal Physics of Escape, won the 2015 Press 53 Award for Short Fiction. Her short stories have received the Howard Frank Mosher Prize and the Tusculum Review Prize and have appeared in Best American Nonrequired Reading, New Stories from the Midwest, SolLit Selects and numerous literary journals. She works as a freelance writer and editor in Lancaster, PA, where she lives with her husband and two daughters.