Review of Elizabeth Gonzalez’s The Universal Physics of Escape 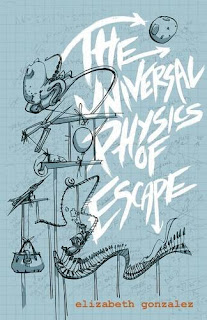 I’ve always had a thing for the octopus. When I was in second grade, I fell in love with Jacques Cousteau’s Octopus, Octopus and wrote one of my first short stories about a friendly little cephalopod and his adventures in the sea. I’ve always wanted an octopus for a pet, one named Victor, fully expecting him to escape (as the octopus is wont to do) and roam across my bookshelves, changing colors over every volume.
Perhaps this is why I was so drawn to Elizabeth Gonzalez’s recently published story collection, The Universal Physics of Escape. A whimsical octopus on the cover is in the midst of an escape, poised on a slingshot contraption of sorts, aiming for the moon. I was expecting something surreal, anthropomorphized creatures escaping from the evil clutches of oblivious humans, or something along those lines.
Instead, these pages took me on a deeply sensitive, highly intellectual examination of the human condition. With stories tied together by the overarching theme of science, and the more subtle themes of loneliness, death, religion and self-discovery, The Universal Physics of Escape is an exploration of how the natural world can be a conduit for understanding complex human emotions. The stories vary widely in length, but all use their space to quietly build towards a final excavation, an unearthing of sentiments that are often too complicated to express in any other way. Bats and moths, eels and octopuses, geodes, black holes, birds and mathematical ratios: all are used not as symbols, but as voices. As a language for navigating the often terrifying loneliness of trying to find your place and your relationship to others in the world.

Not all of Gonzalez’s stories are filled with such a heavy weight, though. They are quirky at times, and tender. Claire, the central character to the title story, is an astronomer, but also a frustrated suburban mother. She seems strange and distant at first, fixated on an octopus, but as the layers of the story peel back, she is revealed to be a relatable character. She makes school lunches, deals with her husband’s job and tries to fit in with church groups and dinner parties. The layers continue to shed and slowly we become aware of something profound happening. Claire is awkward and vulnerable. She is confused, unsure, grasping at something to hold on to as she tries to understand her marriage, her role as a mother and herself. Suddenly the line, “Arms. Not tentacles, not legs, he said, just arms. For holding on” develops a new gravity in the story.
It is this continual development, I think, that makes Gonzalez’s collection so rich for me. Nothing is surface level. Everything is connected. So many things are not what they seem as they shift, expand and retract with all the possibilities of scientific discovery and all the temperaments of human fallibility. “The Universal Physics of Escape” is my favorite story in the collection, but “Here” provides the touchstone for understanding and appreciating Gonzalez’s prose:

“How do you know, she wonders, when you’ve found what you were looking for? She has been a stranger on this road forever, hunting after things that shine; she still can’t tell from the cast and fall of a thing whether it is food, whether it is stone.”