Review of Nick Suttner’s SHADOW OF THE COLOSSUS 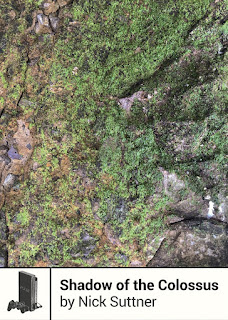 Shadow of the Colossus

Boss Fight Books is killing it. Since its launch (and incredibly successful Kickstarter campaign) in 2013, Gabe Durham and his team have released an impressive slate of titles, all critical and personal explorations of video games. Their tenth title, Shadow of the Colossus by Nick Suttner, is a deft balance of the game’s creation story, gameplay description, context within the gaming industry, and Suttner’s personal relationship with the game. Suttner is working with prime source material, an acclaimed, beloved, and emotionally resonant game that, as he makes clear, remains singular among its peers even in the decade since its release. Suttner’s nearly reverent attention to detail, combined with the game’s inherent fascination, makes for a compelling read.

Shadow of the Colossus is a game that relies heavily on its visuals; in a game with little dialogue and relatively few gameplay elements and characters, it is the vistas of the Forbidden Lands and the varied, towering Colossi that give it much of its power. This could be a handicap for Suttner, but his obvious devotion and attention to the game through multiple playthroughs makes him a more than able guide, painting pictures for the reader of the many natural spaces the game’s playable character, Wander, travels, as well as the Colossi themselves. His descriptions will have anyone not familiar with the game’s design rushing to Google. Suttner also takes great care with the emotional journey of Wander’s story, illustrating well the conflicted nature of the game—Wander’s quest to save Mono versus the increasingly bitter task of taking down the Colossi. His walkthrough of the game’s story should appeal both to those already familiar with the game and those who haven’t played it. (Though if you are unaware of the story’s conclusion, be warned. He takes the reader all the way through the game’s finale.)

Suttner breaks up Shadow of the Colossus’s narrative by delving into short explorations of its creators’ intentions, motivations, and techniques, as well as connections between the game’s elements and other popular titles. This provides both an interesting behind-the-scenes look into Team Ico’s creative process and serves to orient Shadow of the Colossus in the greater gaming landscape, often showing in the process just how unique the game remains. Suttner effectively gives credit to the strategic and artistic efforts of the team that brought the game to life, particularly the game’s creator, Fumito Ueda.

What truly rounds out the book, though, are Suttner’s discussions of his personal experiences with Shadow of the Colossus and how it has affected him both personally and professionally. He makes his telling of Wander’s journey more compelling by fully investing himself in the game’s story. Suttner’s own emotional reactions are the best way for the reader to understand the beauty, melancholy, and futility the game weaves. The highlight of his personal anecdotes is the description of a trip to the Sutro Baths area in San Francisco, where he was reminded of the landscapes of the Forbidden Lands and took the photo that is used on the book’s cover, a mossy stretch of rock that takes on a new significance after a read through of the book.

Shadow of the Colossus is a worthy entry in the Boss Fight Books lineup. It’s a fascinating look into the quiet majesty of the game and will appeal to ardent fans and newcomers alike. (December 2015)