Interview with the author: Nick Suttner 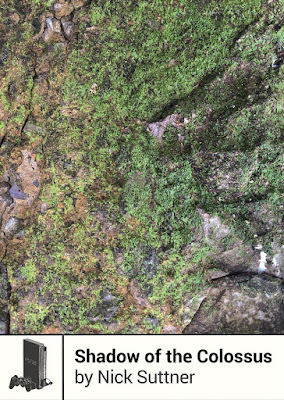 Taylor Breslin: You describe the experience of playing Shadow of the Colossus with such care and feeling. What aspects of the game do you think make it such an effective emotional experience for the player? Are there any other games that have produced a similar reaction/attachment for you?

Nick Suttner: Thanks very much for saying so! I think Team Ico’s games are so emotionally affecting in large part due to the subtlety with which they approach their narratives. The overt story elements are minimal (even lonely at times), and instead of asking the player to care about the tale that they’re weaving, they simply ask the player to be curious to fill in the gaps with an imagined history or wonder themselves what the relationships between their characters are. I feel that the best videogames are about mystery and discovery, and Team Ico’s games have that in mind constantly and holistically. The only other games that have produced a similar reaction at times would be Journey and Flower from thatgamecompany, experiences also focused on mystery and wonderment, with a similar naturalist beauty at their core.

TB: How did the experience of doing such in-depth research and critical evaluation of the game impact your impression of it, if at all? Was it strange to come at a game you love from the angle of a book-length study?

NS: Surprisingly it was never really strange for me. I’ve always felt like I had so much to say about SotC since it informs my relationship to videogames so much, so writing the book was as much a matter of extracting it from my brain and organizing it, as anything. Replaying it with a critical eye made me appreciate it more than ever though, it’s just so different from any other game or entertainment experience. I’m really glad that taking a somewhat academic approach towards the experience didn’t taint my love for it, or I might have had to stop in the middle!

TB: Do you think Shadow of the Colossus changed players’ expectations for games, in terms of visual design, gameplay, or the emotional payoff of a story? If so, do you think these expectations have had an effect on industry trends since its release?

NS: I think (their first game) Ico had an influence on telling stories through gameplay rather than cutscenes, helping creators express themselves through the interaction that is so fundamental to the medium of games. I don’t think SotC has had as much of an influence on the industry, oddly enough; it may have furthered some of the takeaways from Ico, but SotC is so singular and coherent that I can understand why it’s difficult to extract any one element and build off of it. I think it’s certainly been inspiring to many though, and if anything has encouraged some creators to approach their projects more fearlessly, to skip over elements that are too complex and favor minimalism and mystery instead perhaps an appropriate legacy for SotC, if a less obvious one.

NS: I really like the idea of deeply exploring and engaging with a single game or franchise, as the Boss Fight Books series has. The press and media around games is often so news-driven and dilettantish, especially now being driven so much by YouTube and streamers. I think a counterculture to that is important, taking our time more slowly along the way with games that deserve it, and discussing the artistry behind them. If I’m able to dedicate the time and resources to more games writing, I’d like to contribute further to that cause.

Read a review of Shadow of the Colossus HERE.