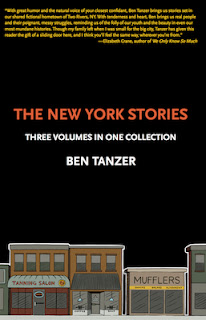 Cheever may have swum through the calm pools of suburban New York, but in The New York Stories, Ben Tanzer fights the floodwaters that have the power to mold and destroy entire communities.

The New York Stories is a combination of three previous volumes by Tanzer: Repetition Patterns (2008), So Different Now (2011), and After the Flood (2014). While each catalogs life in Two Rivers—a stand-in of sorts for Tanzer’s hometown of Binghamton, NY—they do so much more than that. Throughout, Tanzer has his characters battle with the mundane as well as the life-changing in small town America. In “The Babysitter,” for example, the narrator wrestles with memories he has of his babysitter, Tracey, and her friends. While everything—from sleeping around to having babies out of wedlock with teenagers—seems to be going on around him, the narrator sits and observes, steady as a rock. Towards the end, he says, “And me, I never leave the neighborhood. I don’t see any reason to. It’s quiet and I like it that way. I stay long enough, in fact, to watch everyone eventually move back.”  It’s this point of view—that of the diligent observer—that makes Tanzer’s stories so rich and so engaging. His eye for detail is the eye that his characters use to get through life.

By the time readers hit After the Flood, readers will pick up on an eddy effect in Tanzer’s stories. Certain characters come and go, constantly dealing with the same “memor[ies], pain, lust, and violence.” Regardless of where they are in life, these people circle the same drains, obsessing over the same topics that haunted them as children and as adults. They see in themselves what they saw in their parents and their parents’ friends. Are the residents of Two Rivers going to be good fathers and husbands? Are they going to be the ones to end their marriages? Are they going to enter willingly into therapy in an attempt to figure the previous questions out? Over and over, Tanzer shows his characters grappling with these topics and, again, he focuses in on the details that really showcase his characters’ faults and pains. In “God’s Work,” a story about two empty-nesters who institute a “sex night” so as to have a tradition of their own, sums up what most of Tanzer’s characters probably should understand, but don’t. At least not yet. As his wife slowly dies, the narrator thinks, “I realize now this whole thing is about mortality, hers and mine, that when the clock begins to feel like it’s ticking, really ticking, and time begins to slip away, that’s when we start to desperately hold on to what we have.”

Watching someone grow—whether it is a writer or a character created by that same writer—can be an illuminating, educational experience. It allows the viewer/reader to track the nuances that find their way to the surface over time. The New York Stories gives readers the chance to see this growth and change both in Tanzer’s characters and in Tanzer himself. (May 2015)

Reviewer bio: Sam Slaughter is the author of When You Cross That Line, God in Neon, and Dogs. His work has appeared in places such as Midwestern Gothic, McSweeney's Internet Tendency, and elsewhere. He is the spirits writer for The Manual and can be found online at www.samslaughterthewriter.com and on Twitter @slaughterwrites.