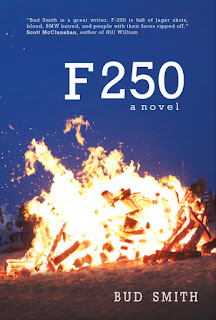 From the very first pages of Bud Smith’s recently released novel F 250, I felt myself in familiar territory. Spider Bar could have easily been Lucky’s back home, and the characters crashing through the novel’s pages had the faces of friends and enemies, drinking buddies, guys in the band and that one dude who always hung around for every show, hoping someone would spot him a beer. In short, Smith’s tale of music, mayhem, bad decisions and lost dreams is as authentic as it gets. Many a novel has tried to walk the line Smith takes here and the story ends only in hipster posturing and pretention. Without a doubt, Bud Smith’s F 250 is the real deal.
With this in mind, I’d have to say that F 250 is for real readers of this genre as well. With an abundance of sex, drugs and rock n’ roll, this isn’t your mama’s novel. The main character Lee Casey is floating through life on a tide of desperate, drugged-out friends and half-way talented musicians. The fact that Lee’s main band, Ottermeat, is a noise band is indicative of Lee’s life; it’s messy, distorted, full of heart, but often directionless. A description of Lee playing a gig in a nearly empty bar perfectly captures his state of mind: “I tried my best to fake it through the songs, but it was pretty obvious that shit was all wonky. It was just me and Seth up there; I didn’t have any place to hide.”
F 250 is weak on plot, but in this case such a deficiency works because it mirrors Lee’s life. In many ways, F 250 is an intense character study. It is the relationships in Lee’s life—with his friend and drummer Seth, with two listless but sex-crazed girls K-Neon and June Doom—that are at the core of this story. The actual events that throw these characters together are second to how they react with one another: pin-balling into each other in volatile, often humorous and often heartbreaking ways. In one of the most honest passages in the novel, as Lee contemplates the convoluted love triangle he has wandered into, the crux of both the character and the story is illuminated: “I took whatever opportunity presented itself to show them the depth of my oddness and the way I belonged nowhere and everywhere at the same time.”
In contrast to the fluidity of Lee’s character, Bud Smith’s prose style is staccato and sharp. His sentences smash into one another in a cacophony of hyper-realism that sounds overwhelming, but works perfectly on the page. Smith’s attention to detail is spot on and while at times perhaps too much information was provided, the world that is spray-painted across the page is raw and vivid. Bud Smith reminds me of a young Bret Easton Ellis, if Ellis were slumming it in New Jersey. With F 250, Smith has most certainly stamped out his mark and I can’t wait to read what he hurls at us next. (May 2015)