It is Better to Travel in Hope than Arrive in Despair*: Review of Greg Shemkovitz’s LOT BOY 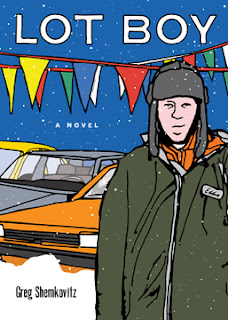 There are few places worse than a waiting room.  Whether you’re waiting to see a doctor or just waiting to get your car fixed, it’s a terrible process.  Best case scenario, you spend a bunch of money and return to homeostasis.  Worst case scenario, whatever you’re trying to fix is beyond repair.  Either way, you remain in a state of anxious indeterminacy until someone more knowledgeable than you (and you hope, as trustworthy) gives you the news.
This sense of anxiety and the desire for something better infuse Lot Boy by Greg Shemkovitz.  Set in the bleak winter landscape of Buffalo, Eddie Lanning, son of “Big Pat” Lanning, spends his days at his father’s Ford dealership as the resident lot boy.  Emptying the oil drums, sweeping the floor, detailing the cars, going on parts runs—all of these are the menial tasks that occupy the narrator’s day.  He stomps around, full of rebellion and a bad attitude, wanting nothing more than escape—to get away from his crass and ill-tempered father, to get away from the drudgery of the dealership, to get away from the endless snowy fields and strip malls of Buffalo.
Each night, he only makes it as far as a joy rides around town in one of his father’s cars, occasionally getting picked up by the police.  The opportunity for a more permanent escape presents itself in one of Spanky’s schemes, a mechanic whose catch phrase is “Shit’s fucked up, dude, you know?”  They will order extra parts and sell them to one of Spanky’s associates, a terse man with linebacker goons.  From the outset, it is obvious what a terrible idea this is.

Spanky asked me to meet him a gravel parking lot off Tifft Street, near the nature preserve.  To get here, you have to go through a shitty part of South Buffalo to get to an even shittier section, until you cross a bridge into the wetlands and fields and eventually hit the rundown industrial lakeshore.  Seeing all this decay and frozen debris pass by my windows, I realize that the only reason anyone would ever come here is to sell stolen auto parts to somebody who would only come here to buy them.

Of course, escape is not so simple.  While miring himself deeper and deeper in Spanky’s plot, Eddie also must deal with the resurgence of feelings for an ex-girlfriend, a woman whose past is evident in her limp and the fact that she’s living in a house full of women.  Eddie also must deal with his father’s illness, a reality that worsens the more Eddie tries to ignore it.
Predictably, Spanky’s scheme goes awry, and Eddie is left to deal with the aftermath of his decisions.  This plot winds up in a satisfying way, and it helps highlight what Eddie is trying to leave behind—his family at Lanning Ford: OJ, Deluca, Selznick, Jack, Andrew, Lester, and Edith, who Eddie once thought, at a young age, was his mother.

Imagine growing up surrounded by mechanics… Greasy, dirty-mouthed perverts, all of them…Imagine what that means for a child.  It means developing an aptitude for mechanical vocabulary and simple mathematics at an early age.  But it also means handing in homework assignments dotted with greasy fingerprints.  It means knowing how to hold your own in the locker room when all the boys are talking trash.  But when it comes to girls, you have no clue…You gain an imbalanced form of etiquette.  You become a smart-ass, calloused by dozens of older brothers and their constant jabs.

Though you can leave a place, home, that tenacious and inchoate feeling, is not so easily abandoned.  It seeps into your skin like oil, leaving you forever altered.  In the end, whether or not Eddie finally escapes, it takes the entire novel for him to finally understand what it is that he’s leaving. (July 2015)

Reviewer bio: Melissa Reddish is the author of The Distance Between Us (Red Bird Chapbooks, 2013) and My Father is an Angry Storm Cloud: Collected Stories (Tailwinds Press, 2015).  Her stories, poems, and reviews have appeared in print and online journals.  She teaches and directs the Honors Program at Wor-Wic Community College on the Eastern Shore of Maryland.  When not writing or teaching, she likes to do stereotypical Eastern Shore things, like eat crabs smothered in Old Bay and take her Black Lab for long walks by the river.