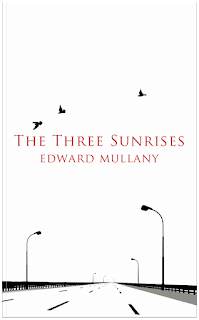 If you’re familiar with Edward Mullany’s previous books or his comics, you’re no stranger to his balance of humor and creeping dread, how one image can give you a feeling you can’t quite place.  His trilogy within a trilogy, The Three Sunrises, continues his previous works’ apocalyptic themes, offering conclusion without resolution. While Mullany’s first two books in the trilogy were poetry collections, The Three Sunrises is a collection of three novellas.  It’s as epic as three apocalyptic books in one can be, but it’s also quiet.  You leave the book feeling you’ve been on a journey, but you don’t feel the weight of 400 pages.

The first novella, “Legion,” is told in short chapters.  It starts out episodic and becomes more and more linear as we follow a first person narrator through his day to day.  There is always something a little off with his world, and the story is peppered with absurdity, wit, and terror—from a run-in on the subway to screwdrivers falling from the sky to not remembering a single instant of buying dish soap—as we edge toward his world’s demise.

The second, “The Book of Numbers,” is a straight narrative, but the twists and the stops and starts are anything but straight.  This journey story transitions the way dreams do as we find ourselves in stranger and stranger worlds with imagery reminiscent of Revelations.  But it’s a journey that leads us back to beginnings and back to middles that made this reader feel she and the characters were in purgatory, which feels appropriate for the middle story.

The final novella, “The Three Sunrises,” returns to short chapters as the narrator tracks a man who is his exact double through the city.  As we’ve come to expect from the book, this is only the beginning of our narrator’s journey.  In fact, many of the characters throughout the book become desensitized to the twists in their stories, commenting that it would be stranger if something didn’t happen.

What makes these stories stand out among other journeys to the end (or to the never-ending) is the narration.  Whether in first of third person, the voice is polite.  It’s observational and measured, whether discussing the mundane or the biblical.  Even when expressing emotion, there is a remove as the narrators rephrase sentences, searching for accuracy over pathos.  And this not only adds to the peculiarity of the characters, but it also lets the image and action take over.  Often the narrator ends a scene right when a different kind of story would push forward to action and rumination.  Instead, we are left to finish the scene or the meaning.  We are left to laugh, shudder, or—more often—both. (June 2015)