Review of Christy Crutchfield’s HOW TO CATCH A COYOTE 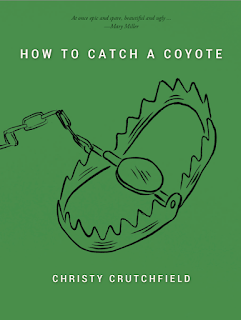 How to Catch a Coyote

How do you survive a family? That is what is at the heart of How to Catch a Coyote. In Christy Crutchfield’s first novel, she lays everything out for the reader – an entire family history from start to finish, first unplanned pregnancy and all. But the history has been ripped apart, the pieces scattered to the four winds. It’s a great creative leap by the author, who shows us the collective patchwork of each family member’s memories, skipping back and forth between time periods. The primary focus goes to Daniel, the youngest of the Walker clan, who begins the novel writing a sort of family history for a college writing course, finding the effort pointless. With a bit of confidence, Crutchfield has Daniel lay out all the bare facts in the very first chapter. It’s a brave move as most authors (and their editors) would be too scared to reveal it all from the get go. Crutchfield handles it with deft skill. She returns to each era, showing it to the reader from different angles and points-of-view, each family member telling their side like a southern Rashomon. So we already know about the parents break-up and what ultimately happens to Hill Walker, the father. But as we return to the past again and again, seeing how each family member saw it unfold, we find new details and revelations. We also see more of the stark humanity of each family member. Each as complex as the other. All a sum of their faults.

All of this would have been a mere literary gimmick if Crutchfield couldn’t match it with really outstanding writing. She has a great knack for being both spare in her prose, not wasting a word, and yet somehow injecting something bigger within the simple lines. Small incidents have larger implications.

“The middle of the week is when his mother takes the longest showers. He hears her mumble in there, probably about work or money. The sound is amplified and garbled, but it sounds like she’s working something out. The permanent house feels as empty as the rental house sometimes. His sister warned him of that.”

As the novel progresses, we learn that each member is trying to adapt and overcome the rift that ultimately drove them all apart. Crutchfield again shows a bit of daring by hinting at the source of the rift, but leaving it tucked in the background, a dark stain that no one wanted to clean up. It sends Daniel’s sister Dakota off into the wilds, so to speak, showing characteristics that are eerily similar to the coyotes they see appearing at the edges of the story. It forces Mom to put all her energy into being a woman she really doesn’t want to be, losing the connection with her own children. It leaves Daniel adrift, as confused by himself as the rest of his family. And it leaves Hill Walker banished from his own family, never quite able to get them back.

In the end, the novel has moments of tragedy and beauty, all welded together in simple scenes that communicate the tiny losses that stack up over time. “You can never go back” seems to be the lesson learned. You can only adapt and survive like a scavenger in the wild. (July 2014)

Purchase How To Catch A Coyote HERE.

Reviewer bio: Ken Wohlrob is the author of the novel No Tears for Old Scratch and two short story collections. Visit Ken HERE.