The Stories We Tell: Review of Lori Jakiela’s Belief Is Its Own Kind Of Truth, Maybe 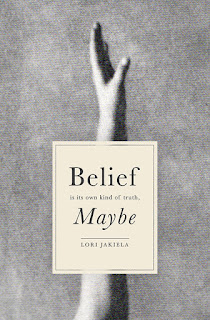 Belief Is Its Own Kind Of Truth, Maybe

We are in many ways defined by the stories we tell, both those we recite to ourselves and to others. Belief is Its Own Kind of Truth, Maybe begins with a line that grabs the reader instantly: “When my real mother dies, I go looking for another one.” Belief is a moving memoir that sifts through the overlapping, conflicting, and at times buried stories of the narrator’s adoption narrative.
When asked what she wants to know in finding her birth mother, Lori answers “a medical history.” It’s a calculated half-truth—the reader knows it and Lori knows it, even writing, “What else I wanted: a name of each doll-layer, each little box, each person inside a person inside me.”
What defines family? How does family define us? In the wake of the deaths of the parents who raised her, Lori searches for her biological mother and works through those questions in what becomes the understandably emotional journey of a flawed and human narrator. As a writer, Lori Jakiela crafts a compelling version of herself as narrator, devoid of sugar coating. Readers of this memoir are on the journey with her, alternating between elated and upset, cautious and rash, fiercely independent and in need of familial support.

Jakiela’s portrayals of other family members— husband, father, mother, birth mother, grandparents—are also richly real, relying on stellar descriptions and anecdotal evidence to paint the characters alive. These descriptions pack punches. They open up the characters and let readers see their insides.
Of the mother who raised her, who Lori calls “her real mother” on more than one occasion as though to interrogate the idea of referring to a biological mother as the “real” maternal figure: “She could blow smoke rings, tiny life preservers lifting off from her pink-glossed lips.” This is the woman who doesn’t want her daughter reading the encyclopedias her husband buys, who says, ‘I want what’s mine to stay mine’…something she learned from her father…[who] wanted his children close. He meant he didn’t want anyone to leave him ever again.”
Even though she’s never met him, Lori’s description of her grandfather is intimate, vibrant. “I know he made bathtub gin to pay for food. I know a few pictures – a thin man, sad eyes like Andre the Giant’s, mugging a tough-guy stance, paperboy cap down low, one pin-striped leg cocked on the fender of a black Ford. I know he died on his birthday the year I was born.”
This narrator recognizes the layers and the ripple effects of all the stories she’s found, told and retold: how her orphaned grandfather’s experience impacted the mother who raised her, how her father’s family affected the way he came to view the world, and how her biological mother was shaped by paternal advice. Raised in an environment of mistrust and cynicism, her biological mother learned not to trust anyone from a father who ignored her I love yous and “raised her not to believe in anyone, not even him.”
From the reader’s perspective, the only time Marie (the name given to Lori’s biological mother) lets her guard down and begins to trust anyone is with the married man who impregnates and then leaves her. As Lori crafts the story of her biological parents dancing in a bar, the reader knows that this will be Marie’s great letdown; this story won’t end well.  “He was smooth, like the floor was ice, like the world was ice, which it was. The world was that cold.”
The narrator nearly always refrains from passing judgment on other humans, even when stories of her family become incredibly unpleasant—tinged with racism, abuse, giant doses of paranoia and abandonment issues. She tries to be forgiving and compassionate with herself, but she always succeeds in extending those kindnesses toward others.
While searching for her biological mother, Lori looks for herself in her own children, sees in her baby daughter a spitting physical image, and in her older son a personality and emotions which mirror her own. “Locklin has a collection of toy light sabers – blue for good guys, red for bad guys, green for guys who feel conflicted…My son, with his green saber, his darker, more complicated moods, takes after me. My daughter is more like my husband, so much pure light.” She focuses on her happy, laughing baby; there’s a sense that she is worried that her son has inherited her darker traits, worry about how what she’s passed down will affect him.
The one jarring thing that at times brought me out of Jakiela’s story was the inconsistency of tenses. While her narrator acknowledges the back-and-forth that often occurs in jumping between present moment, past, and future, at times the shifting tense felt inconsistent, confusing. There’s sureness in the narrator, who knows exactly where she is in time, but the reader can feel a bit like they’ve been set adrift within the story.
Belief interweaves one woman’s search for her biological mother with generations of stories from her adopted family, the family who raised her, and her own married and parenting life. Above all, this is the narrator’s individual story; she knows that it is unique to her, that not everyone feels or talks about family, adoption, and belonging the way she does.
Another adopted character calls adoption “the severing, the primal wound…blood red sugar.” Instead of a severing, Lori sees ripples, endless spider-webbed connections, “all those threads between us that can’t be cut.” At the end of the day, at the end of the memoir, Lori’s story is much more complicated than that; her complicated family history, both biological and with those who raised her, continues to influence her, but it is those who raised her, her real parents, who have inextricably shaped her personhood.
“When people talk about adoption, they talk about what matters more – nature or nurture. There is so much of my parents in me I barely believe in blood.” (August 2015)

Purchase Belief Is Its Own Kind Of Truth, Maybe HERE.

Reviewer bio: Liz Purvis is an MFA candidate in Poetry at NC State and the Poetry Editor for The Fem Literary Magazine, an online literary magazine. Her work has appeared in multiple publications, including Cahoodaloodaling, Deep South Magazine, and Damselfly Press, and is forthcoming in Zeit|Haus and plain china. Liz considers herself a native of the South at large and is fond of hiking, Gaelic trad, and inordinate amount of July watermelon. She can be reached at fempoetry@gmail.com.