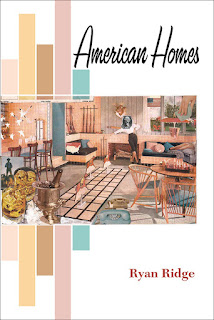 Find a job, get married, buy a house, have children.  For most of us, this plan was laid out before we were born.  But according to headlines, many of us are choosing not to get married or have children.  According to headlines, Gen Y is renting instead of buying.  Yet the house is the corner stone of the middle class American family.  When I ask my students about the American Dream, someone always says, “A house with a white picket fence.”  While the specifics may vary, the significance of basements and attics, of windows and driveways, offer common ground.  Ryan Ridge’s American Homes offers a look at that significance through satire and nostalgia.  The book examines and exhausts the home.  And in doing so, it honors, pokes fun at, and mourns the American Dream.

The book is broken into three parts: Part III (anatomy), Different Voices/Different Rooms, and Ideas.  Each explores American homes with puns, faux history/statistics, and slips into the poignant.  Part III is a manual for American homes, detailing the purpose and history of porches, doors, windows, roofs, etc.  The voice is instructional, and the matter-of-fact tone adds to the humor, using statistics from the “Nu American Center for Statistical Analysis (NACSA).”  The basement door is the scariest door because, “in five homes out of ten, strange things happen.”  When describing porches, it’s important to note, “a person appears 40% more attractive with a cigarette in his or her hand.”  Think Cortazar’s Instructions from Cronopios y Famas mixed with the utilitarian voice of a Saunders short story.  The narrator catalogues everything from the bedroom door, “AKA Cupid’s Flap,” to garage sales, “Name applied to black market items sold and resold (and sometimes traded) by American Homeowners in a tax-free zone.”

The word American is important throughout the book.  These are not simply referenced as homes, but American Homes.  Not just driveways but American Driveways.  American Homeowners.  And because all good humor needs some blood on the floor, American Homes also offers critique of America.  In the section on garages: “Since most American automobiles are powered by foreign oil, it is necessary for the Land of American Homes (AKA “U.S.”) to battle the Land of Foreign Oil (AKA “Them”)...”  Sheds are, “spiritual structures used for storage and hobbies and the beating of disobedient children.  Often found in Backyards, American Sheds are not dissimilar to American churches in that they provide comfort and solace…”  Porches belong to smokers, but once belonged to slave owners.

In Part III, the narrator’s voice occasionally betrays the instructional tone, giving us a taste of the character behind the “facts”.  By Different Voices/Different Rooms, the narrator gives in: “I, the Narrator, living in an apartment with no basement.  I, the Narrator, visiting my parents’ basement in Non-fictionville.”  Where Part III feels like prose, this section feels like poetry.  Where Part III is tighter, this section is more unwieldy.  The narrator knows we’re in on the joke.  The narrator is waxing nostalgic.

But the faux history, the puns, and the humor are still there.   We return to “quotes” and “anecdotes” from presidents, musicians, writers, inventors, the ghost of presidents, and historical figures.  According to this history, when Patrick Henry kept his wife in the basement to treat her mental illness, she “originally coined the phrase Give Me Liberty or Give Me Death.”  And the ache of the American dream via the American home is still present: “My own father kept his Vietnam War medals in the attic until one Christmas my mother framed them and gave the frame to him as a gift.  Now the framed medals are in the same attic, collecting dust.”

The book ends with Ideas, which is exactly what it sounds like: ideas about houses.  I imagine the narrator and his stoner buddies on porch swings imparting their million dollar suggestions for home improvement: “Build an antenna with a signal strong enough to pick up local singles without leaving your American Home.  *NOTE: This idea later became the internet.”

Each section is accompanied by the drawings of Jacob Heustis, which fittingly emulate diagrams.  However, there are smudges in the corners, almost illegible handwritten labels, cartoon images.  They lie between diagram and notebook doodle, like our narrator in American Homes, like many Americans making their future right now, between plans and dreams. (December 2014)