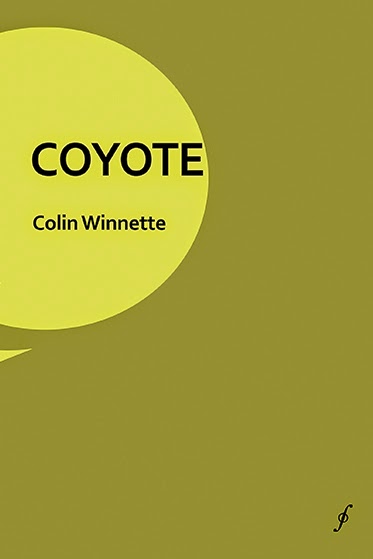 I’m not giving anything away when I say Coyote is about a missing child. It’s the first thing you find out in the first line of Colin Winnette’s new novella. But what follows is not stock mystery or suspense. All tropes are thrown out the window. The disappearance of the child is treated almost like a natural disaster. Something that couldn’t be avoided, much like a tornado. And now the parents must pick up the pieces and get on with their lives. Easier said than done. Things have become too quiet. The talk shows are no longer calling them, the investigation ground to a halt months ago, and one of the two might be losing their mind. Winnette expertly turns this into a twisted and morbid tale of a married couple falling apart one day at a time. It’s almost as if he heard “Song of Joy,” the macabre opener of Nick Cave & the Bad Seeds Murder Ballads, and said to himself, “I can top that.” Coyote is also a confession of sorts, but the story swims in even murkier waters.

Winnette is an effortless writer. He has his tricks and his way of playing with the novel form, but his prose is so relaxed, so surefooted, you almost forget that you’re reading the blasted thing. The story flows out naturally, riding the waves of the narrator’s voice. The chapters are short and punchy, but full of amazing depth. A perfect example: the wife never refers to her spouse as her “husband.” Only as the child’s “dad.” It’s a simple swap in identities, but it speaks volumes about the distance between the married couple. Winnette shows real skill in making you feel as if everything that occurs in the novella is part of the natural world. You can see the trees and the field and the fence surrounding that tiny house out in the middle of nowhere. And then he gut punches you with this simple but dark story. At times you almost feel as if you’re watching a time-lapse video of someone losing their mind over many months. In lesser hands, Coyote would’ve been too caught up in the noir of it all or deteriorated into MFA writerliness. Instead, Winnette delivers a taut story that never feels overwritten. Each word counts and drags you deeper into the whole maddening tale. Bloody hell indeed. (January 2015)