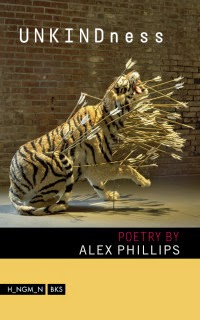 Unkindness is Alex Phillips' second book-length poem. It is split into thirty six multi-layered sections, where shifting perspectives cover various acts and consequences of human cruelty. The poem, as its title suggests, tumbles through an amalgam of animosity ranging from basic and personal selfishness, neglect and abusive behaviour to crimes of terror and the unjust tragedies of war. There is an underlying sense of regret and an overwhelming feeling of helplessness which gains momentum as the poem's intensity increases. The piece begins matter-of-factly—

My species is engaged
in furious

—setting an obvious precedent which in spite of the poem's more obscure sections is maintained throughout the book.  As the pace progresses so does its wordplay which skips and dances with rhythmic repetitions that hint more than state, leaving plenty of room for interpretation. It is the building momentum in subject matter and poetic phrasing which makes the poem work in terms of payoff. While there is a clear and definite narrative, it is formed in thought-like patterns which slip in and out of ambiguous territory as though the conscious and subconscious mind are taking it in turns to tell the same story.

I line the past with gauze

The past is like a tunnel I stare into

The edges are fuzzy

It is perhaps the apparent randomness of thought and how thought is influenced by memory and circumstance that reveals the gems within the poem.

Through a carefully crafted mixture of solid facts and fantasised emotional conjecture, the poem's conclusions are left in the hands of the reader. As the author looks back at familiar feelings of isolation and rejection, as well as security and joy from his high-school days, the reader's own experiences and agendas become central to the poem's essence.

Did I tell you about
becoming captain

For an informed understanding of humanities unkind nature one has to know something of its brighter and lighter side. There are moments of wonder and refreshing vulnerability within this work that are almost like pools of clean water in a desert of grim despair. The poet also uses a tongue-in-cheek humour to give context to the crushing aspects of mankind's cold savagery.  Unkindness picks apart individual malevolence and collective heartlessness and puts them back together in a way that demonstrates how these unfortunate bedfellows are spawned from the same place. At the root of all unkind deeds is a seed of self, and it doesn't take much in the way of encouragement for that seed to sprout and grow. (June 2014)