Drowning in Confusion: Review of Ryan Blacketter’s DOWN IN THE RIVER 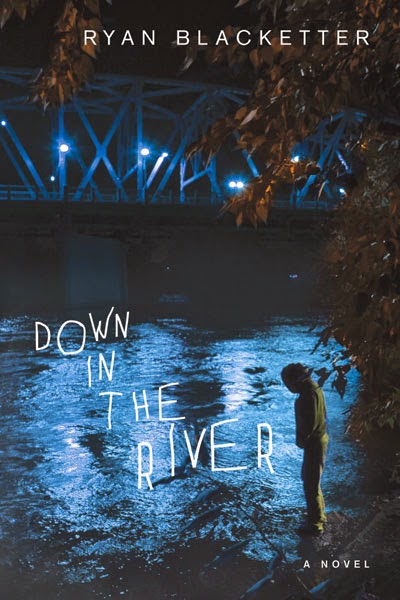 Down in the River

A corpse, ultra-conservative Christians, and the beautiful Pacific Northwest. What more could you ask for from a novel? Ryan Blacketter’s Down in the River delivers all of these elements in a macabre, heartbreaking story.

The story, on a surface level, has all of the elements that could make it a highly interesting novel. Lyle Rettew is a mentally-unbalanced teenager whose family—his fragile mother and hard-lined older brother—was kicked out of their ultra-conservative church when his sister, a meth-addled firebrand named Lila, dies by drowning. The patriarch in the family died in a similar fashion. Now living in Eugene, Oregon, Lyle acts out and puts stress on his family. He’s supposed to be medicated but does everything in his power to avoid taking the drugs.  Lyle vacillates between understanding he is sick and ignoring it. One night, after hearing from his friend Martin that a little girl who died is unable to rest peacefully in her grave because she’s buried in a manner that goes against her religion, Lyle goes with Martin and against Martin’s wishes, Lyle steals the girl from the mausoleum. He then spends the next few days getting high with a girl while he totes the corpse of the girl around in a backpack. Eventually, he goes on the run, finally lays the corpse to rest, sort of, and is apprehended.

The basis for this novel—the stealing of a corpse by a high teenager—is weird. There is no two ways about that. It’s macabre and unsettling and, has the potential for some readers to be a sticking point of engagement with this novel.

“‘She’s so light,’ Lyle said. ‘She doesn’t weigh a thing’…He guided her into the bag, foot first. Then he eased the lose leg inside, fitting it in place as best he could. But she was too tall to fit inside the pack all the way. He didn’t want her head sticking out and looking over his shoulder.”

While this corpse is integral to the plot, Blacketter could’ve done a better job of normalizing this enough in the environs of the story so that the event does not come off as garish. Instead, Lyle spends the next few days dodging not-too-observant adults and ignoring the smell of a rotting corpse that he’s toting around in his backpack. If Blacketter simply had his characters respond to the corpse in a backpack thing, then there would’ve been hope for this storyline. Instead, everyone in the story exists in an unsettling little dream world.

The biggest issue with this novel is the often-incoherent dialogue. There are multiple stretches of dialogue that, at best, seem like they were slapped together with chunks of magnetic poetry. The conversations aren’t necessarily hard to follow, but it is hard to follow how or why they contribute to the advancement of the story. One example of some of this comes during a conversation with a few different teens about stealing alcohol:

“I don’t think he even cares if we steal,” Devon said. “I don’t even try to sneak it anymore. I go in and take what I want.”
“Don’t get busted again,” Monique said. Your dad’ll take the Triumph.”
“I’m a better thief now. I don’t steal anything when suspicious old ladies are around.”
“Do the circus thing!” Shanta called.

Blacketter has the beginnings of good dialogue but too often he tries to introduce an odd vault away from whatever is going on and it leads to disjointed prose that throws the reader.

The argument could be made that the disjointed nature of the dialogue is meant to be a reflection of the state of mind of the protagonist. You could make this argument but just because you can make the argument doesn’t mean it should be made. In the novel, the dialogue is jerky, fragmented, borderline incoherent almost as much as it is intentionally disjointed.

This isn’t to say that Blacketter doesn’t craft a good novel. He does. Blacketter is able to tackle, mostly successfully, the inner workings of someone battling a mental disability. He folds it into the narrative and, while some moments are not believable (there are times Lyle’s brother’s reactions are flat), they work for the most part. Blacketter delivers a very unsettling piece of literature to readers and allows them to sit with those unsettling feelings for a bit. The novel is heartbreaking, too. Lyle Rettew spirals quickly out of control and the best readers can do is hold on, praying to God that things come to an end before it’s too late. (January 2014)

Purchase Down in the River HERE.

Reviewer bio: Sam Slaughter is a writer based in Central Florida. He's had fiction and nonfiction published in places such as Midwestern Gothic, McSweeney's Internet Tendency, and elsewhere. His debut chapbook, When You Cross That Line will be published May 2015. He holds various roles for Atticus Review, Entropy, and Black Heart Magazine. He can be found online at www.samslaughterthewriter.com and on Twitter @slaughterwrites.