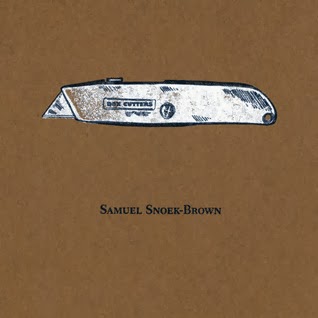 The stories in Box Cutters, Samuel Snoek-Brown’s flash fiction collection, operate on the principle that what’s included suggests what’s left out, with certain pieces resonating so profoundly that you can’t catch your breath. He makes minutely precise language choices that evoke specific states of mind, whole lives lived, and whole worlds spinning in only a few words. Throughout the book, sharply rendered moments show us various characters responding idiosyncratically to feelings of powerlessness.

The nameless main character of “Dream With Enough Conviction,” who falls helplessly in love with her husband’s killer, stands a poignantly rendered example. She goes to visit the murderer instead of engaging with her fatherless son. She’s often so overwhelmed with sadness that she drives for hours on aimless trips, “drifting down the highway like it was pulling her along it, an asphalt current and she was powerless against it.”

We also see characters frustrated by their lack of power in the collection’s strongest story, titled “The Voice You Throw, The Blow You Catch.” Here bar regulars watch as new patrons approach the watering hole’s resident eccentric, a curvy woman named LoAnn who obsessively works a ventriloquist dummy. The population of male regulars is comprised of failed suitors now enthralled by the spectacle of further futile attempts to pick up LoAnn and her dummy. Both LoAnn’s and her watchers’ quirks are on full display. Despite the brevity, you feel that you’ve come a distance with these characters, that you’re also fixedly watching as another poor sucker tries his hand at bedding LoAnn. When LoAnn mysteriously quits coming to the bar, you’re left feeling just like the regulars, that you’d witnessed something magical and have no means to bring it back.

Finally, “Box Cutters” presents cowed corporate office staff warily observing as prison inmates, toting box cutters, diligently assemble dividers for their floor. The narrator, who will work in the newly cordoned-off environment, comments that the office “must be what prison feels like, walls going up everywhere and the constant threat of getting shivved.” Snoek-Brown doesn’t settle for the easy metaphor comparing corporate America to prison. Instead, a character known only as “McCullough from Receiving” says that “prison probably wouldn’t be that bad” and that “he could focus more on his workout” and “[m]aybe get a tattoo.”

In similar ways, these stories’ characters move beyond the expected, beyond easy diagnoses of contemporary ennui brought on by feeling powerless. The lover of her husband’s killer, bar regulars bereft of the object of their perverse affection, and helpless corporate employees contemplating their office’s conversion into a many-walled prison all exemplify Snoek-Brown’s infatuation with portraying the unorthodox enthusiasms we forge to ward off the pain of helplessness. (November 2013)