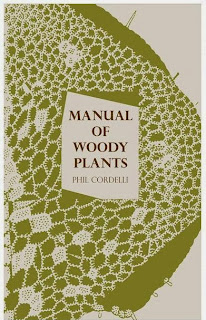 If I'm allowed to be a bit superficial to start, and dammit I am, I have to say that this book, as an object, is gorgeous. The cover is a smooth rustic brown paper printed with a clean olive-green design, cut perfectly flush with the pages it binds. It is so well-made, I cared for this book's well-being. Ugly Duck Press deserves whatever buzz they get if they produce pieces of this quality, especially for limited runs.

Phil Cordelli's Manual of Woody Plants is a puzzle, but not one that's meant to be solved. I am the first to admit that my taste in reading, especially in poetry, may be more conservative than many. When encountering the work of poets who seem to embrace the language school of poetry's bafflingly loose regard for form, grammar and syntax, I feel that I lack the training and the vocabulary to properly appreciate what I am reading. And, well, I like grammar and syntax, it seems such a shame to me when it is deliberately eschewed. Yet I refuse to dismiss Cordelli's Manual so easily, because this is clearly a book that was carefully written, and any rule that he breaks, he does so with obvious intent.

Ostensibly formatted as a sort of field journal, Manual is organized by plant type (Decidious, Coniferous, Pines, Shrubs, etc), and each poem is a plant's scientific name in Latin. Every entry approaches its title differently; some are basically descriptive poems, detailing the plant subject in a lyrical fashion. Other poems use the title as a jumping off point for some personal memory, or other topic. There are various sketches and doodles interspersed throughout the book, marginalia that one would find in an actual field journal, lending to the illusion.

Most of Cordelli's poems are disjointed in some fashion, rarely does one line follow into the next without some unexpected indentation, punctuation, or mid-word caesura. He hints at his process in the acknowledgments, some combination of collage, cropping, rearranging, and remixing. A less explicit, but perhaps more meaningful explanation of his technique is found in Aesculus hippocastanum: “This is how I would rewrite it:/ poke holes underneath each letter/ and breathe through them”.

I hear that breath throughout this book. I recommend reading several poems in a sitting, allowing the sounds of the words to take the fore. Cordelli's voice is rich and varied, the phonemes he chooses come off of the tongue like rounded berries (“striped tendon to the slopes”), giving even the most inscrutable poems an incredible texture. In some places, he acts as a curator, appropriating found texts to highlight something new. I love the complex history buried in this line from Liriodendron Tulipifera (Tuliptree), which he presumably borrowed from a historical marker in some park: “It [the tuliptree] was, until its death in 1933 at the age of 280 years, the last living link with the Reckgawawang Indians who lived here”. It takes artistry to recognize that, and know to put it in a book. Other poems skew more traditional, such as Prunus serotina (Cherry), which is like his version of a haiku:

Blossoms are falling
against what we take
to be clouds. Shades
are beginning to be
drawn.

Still there are other poems that are entirely unrecognizable to me, that are deconstructed beyond anything that I would recognize as a poem – I'm not convinced a series of backslashes can be considered a stanza. Hell, I don't even know what a backslash sounds like. My suspicion is that my hard-to-ignore impulse to understand them is the very reason why I will never truly understand them.

No matter, though, because I can pick and choose what I like and there are a lot of things in Manual of Woody Plants that I like very much indeed. I don't need to completely parse this phrase:

there's a difference between feeling

(the clouds)
and ascension

to know that it has meaning.