Review of Laura Relyea's ALL GLITTER, EVERYTHING 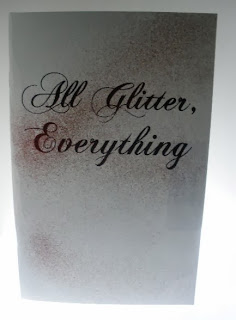 Glitter is unstoppable.  I do not mean this in a metaphorical way.  If you touch anything glittered, you become glittered.  It sticks to you, it permeates, you find it days later on your fingers, in your bed, on your computer as you type a review.

Laura Relyea’s chapbook ALL GLITTER, EVERYTHING is covered in those ever-present sparkles, but glitter is just a indicator of the character who is “all” and “everything” in this collection.  Ke$ha is the ubiquitous one.  Each poem is a dedication to Ke$ha and each poem details the speaker’s adventures with her.  Often the speaker addresses Ke$ha directly, but sometimes the poems are more distant—a memory of a faraway friend or a self-conscious admission that, even as a best friend, Ke$ha cannot be fully known.

The collection begins with the Ke$ha we’re all expecting.   Our speaker will tell her future daughters, “Once, your Aunt Ke$ha and I threw a party at a bar and the polar bear carolers confettied the floor with cigarette-scented newspaper clippings.”   Ke$ha is “in pursuit of life.  Her mouth is usually ajar, she is just that excited.”  There is Jim Beam and Jack Daniels and horse racing and, yes, glitter.  It’s a fun exercise of imagination and play.  What situations and settings will we find Ke$ha in next?

But as the prose poems continue, Ke$ha shifts into something else.  Ke$ha is a recovering alcoholic after flipping her truck.  She is the oldest of childhood friends but she also met the speaker in college.  Ke$hsa is a confidant.  She “drove two and a half hours because [the speaker] called her and said [she] needed a hug.”  Ke$ha carries the weight in the relationship.  She is a bike commuter and a mythic baker.  Ke$ha attends readings.   She “is a cowboy in the center of a panicked herd.”  Ke$ha is a portrait in a Michigan hotel.

And we come to realize that these Ke$hi stand in for many women in the speaker’s life, that what begins as a fun exercise becomes a story of development, support, and survival, a story more about the speaker than the pop star.

Safety Third makes beautiful books, and not only have they sprinkled this cover with red glitter, but there is a kind of embedded glitter in each page.  It’s printed on multi-colored pages of what I can only describe as funfetti paper.  It’s a good choice to keep things fun.  Because, even with the complexities and darker moments, that’s what ALL GLITTER, EVERYTHING is about. (October 2013)

Purchase All Glitter, Everything HERE.

Reviewer bio:  Christy Crutchfield writes and teaches in Western Massachusetts.  Her work has appeared in Mississippi Review online, Salt Hill Journal, the Collagist, Newfound, and others.  Her novel How to Catch a Coyote is forthcoming from Publishing Genius in 2014. Visit her at christycrutchfield.com