Review of Christopher Bowen's WE WERE GIANTS 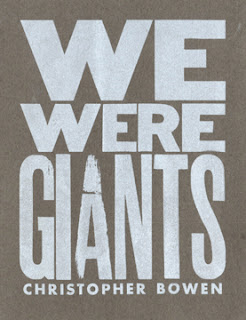 Layered with bands of loss, “on a long enough time line” any aspect of the human experience is apt to repeat. Accomplishment isn’t minimized by its reoccurrence, just as a continual falling short isn’t any less erosive than a singular event. Delving into an archaic emotional landscape, Christopher Bowen uncovers all of the ways that history has rendered us deficient. Perhaps it is only in memory that We Were Giants, but the profound nature of our communal recollection makes our past selves, massive or minuscule, worthy of excavation.

In just eight short-short stories, an evocative antiquity is unearthed. Revealing through their minor heartbreaks and heroics the substance of modern life, the chapbook’s characters face an inertia that abides: underemployed, interpersonally flawed and lacking in vigor, this slim collection especially explores the emasculation of its men through commonplace relics. From the pillows that at night whisper to the father who “can’t afford those things” his daughter deserves, to the wife who “makes eyes at the other firefighters,” to the retiring preacher sitting below a Monet print and considering how his “stepping down was like stepping on water lilies,” experiences fossilize as memories—actual or imagined—and form the indelible impressions of existence.

Perhaps the most enlightening artifacts are byproducts of work. What then if a mere trail of fragments remains, like the father “full of sweat and tears and hunger for something … better” who is forced to travel “selling things statewide” to find ways to cover the “immeasurable” cost of life? Or the husband whose personal traces have been destroyed by the fire he fights, its simultaneous power to set alight and scorch drawing him to a flame that could explode at any moment. And are the humble vestiges of faith, embodied in the final sermon, “when he preaches it to his flock and they see the tired, old man he is” enough to inspire the congregation in the days to come?

Men “in need of care,” particularly from the women in their lives, stratify these small fictions. Yet not all narrators are male; two of the more memorable stories, “The Knocking” and “The Borrowing,” are textured in their telling as matriarchy makes its mark. By letting “one’s grip go to gravity’s pull” and settling into roles of cultivator and nurturer (or flouting such customs), the daughters, mothers, and grandmothers of We Were Giants solidify their heritage. On the contrary, the men are “like an instant message alert, online but nowhere near talking”: unable to prove anything through the desire for something “better” but a “lack of skill and forethought”; convinced that a wife’s flirting “never … means a thing”; or baffled by love that seems “beyond containing and always seeking.”

Unable to embed into static lives, these men strain against the immense weight of time. Acting under the enduring notion that nothing can “reach history books quite so closely or nearly or neatly … [as] any war fought”—these characters often confront with pointless zeal life’s most banal battles. The traveling-salesman husband who is earnestly determined to cover the “unexpected cost of things”; the firefighter who likes to “play with fire and fight it, wrestling it to the ground like a younger brother” but never expecting its smoke to “bring tears to [his] face”; and the “half-crescent bald, gray head” of the suited leader who faces the childhood notion of being perceived as “yellow” or “chicken” if he walks away from his church. Despite their many losses, in Bowen’s characters “the fighter’s spirit” prevails.

Because what is victory to the mortal existence? If everything eventually becomes recollection and all that remains is what is physically left, why can’t lives have been great? Who we were may ultimately matter less than that we were—our very existence preserved in a thriving living memory. Giants, indeed. (October 2013)

Purchase We Were Giants HERE.

Reviewer bio: Erin McKnight is the publisher of Queen’s Ferry Press. Her own writing has been nominated for the Pushcart Prize and W.W. Norton’s The Best Creative Nonfiction, and her reviews of fiction and poetry can be found in multiple venues. Erin lives in Dallas with her husband and young daughter.