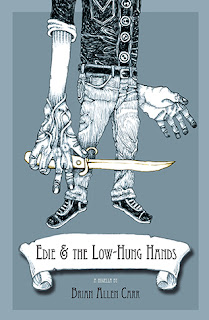 Rarely a book emerges that is possessed of – at the same instant – slicing insight through verisimilitude and the unique throb of the surreal, with enough grip to strangle and enough bizarre magic to make it curiously unforgettable. Brian Allen Carr’s novella, Edie & the Low-Hung Hands, is such a book. A frightening and exhilarating ride with a heart that darkens as it expands.

Marlet is the second son born to a joyless preacher and a sweet-breathed booze addict in the vaguely post-apocalyptic backwater of Victory, where clergy fight death-duels to increase their congregations, and where Marlet’s freakishly long arms and hideously big hands are the source of constant (and often sadistic) scorn and disappointment for his otherwise respectable family. A loveless childhood leaves him with a propensity for swordsmanship that leads to an even greater propensity for killing. When a botched attempt to win over Edie – his life’s obsession – leads to the secret murder of his elder brother, Marlet’s decades of complacent angst boil over with him deciding to leave the only town he’s known in order to find whatever talisman might lead to his love’s reciprocation. Let the body count commence.

Marlet’s trancelike odyssey amidst bombed-over streets and roaming bands of malformed cretins with questionable eating habits and major skin deficiencies might initially conjure images of The Road (there is a salient father/son component that ends predictably badly), but that would do Carr’s novella an unworthy disservice. Edie’s lofted-but-never-flowery prose – “Every terror that rolled those blank-skinned men’s imaginations needed to be a lackluster candle light to my supernova of solicitude”; “speech flaccid in the freeness of liquor” – endows the book with an almost mythological weight, projecting a welcome exuberance onto a decimated landscape that never feels bleak. And like all good myths, there is a timelessness to Marlet’s particular breed of dysfunction, a devastating compilation of unsavory truths – deformity is never just skin-deep; love is almost always idealized and self-serving; spinelessness, especially as it pertains to the possibility of death, is a much more convincing motivator than the desire to act “noble”  – that most people would rather try to ignore or fail to acknowledge in themselves, but which the characters in Edie face head-on with little or no qualms: “That fear is what has kept me alive through so many altercations. Not strength. Not skill. Not experience. No favor from some higher power. I am a coward and so I have outlived.”

It is to Carr’s credit that he renders one of the most unredeemable scumbags to inhabit the page (“I didn’t want to kill a woman. I hit her until she silenced.”) a surprisingly likeable fellow, an anti-hero whose violence-strewn quixotic wanderings are as provocative as they are addicting. Perhaps “likeable” is wrong. Marlet’s familiarly flawed humanity and unrepentant honesty serve to engross the reader, but it is ultimately what his journey signifies that resonates best: “You are uncertain about what lays beyond. You are so used to your veins filled with blood, your lungs with air, your eyes with visions, and your mind with thoughts. You’re fighting to keep yourself comfortable. When a sword is drawn on you, you know. There are two options.” A fight against absence, but also the motivation to deaden a pain that is more important than survival.

Carr’s alternative world might very well be more potent, more glaring than our own. (January 2013)