Review of Jennifer Tamayo's POEMS ARE THE ONLY REAL BODIES 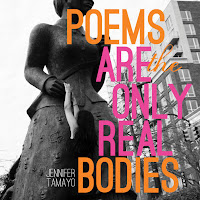 Poems Are the Only Real Bodies: e-pistols for Hurryet Tubman

Sex is invasion and invasion is poetry in Jennifer Tamayo’s Poems Are the Only Real Bodies. The body that most performs that blur and bleed is the last body in the book:

This is important because in an earlier “e-pistol”, Tamayo writes, “Dear Harriet Tubman, // I want to use your body for my own pleasures. In other words, to be historical. In other words, I want to warp your flesh around my subject … In other words, I sniff your garments and cover myself in the glazed sheath of your human skin.”
It doesn’t seem wrong to call this text iconoclastic. Tamayo doesn’t smash the statue of Tubman, but does “dangle from [her] big hand like a metaphor: I’m the slobbery noodle.” Other idols these bodies try to undo from the inside out: art as collaboration between maker and viewer; art (or bodies) as neutral, innocuous, safe, nonviolent; the idols of the past as bodiless and saintly; choices as real. In the anatomy Tamayo provides, writing something means invading it, means filling its body with your body. To write about is to write into. To read is to be written into. The most coalescing and compelling word in these bodies was the compressed word “sobject”—we may sob when we’re physically hurt, or in the pleasure/pain of sex, or in pleasure when we bite into something delicious, or in anguished loss or frustrated rage.
This sequence of bodies is itself invaded by heavy blockletter sections outlining how “YOUR ART CONTROLS YOU …” Replace “art” with “abuser” and these statements could be a series of public service announcements; replace art with “body” and the sense of helplessness, of being a sobject, increases tenfold, within the skin. The bodies stutter, “guh guh guh guh,” toward the word “gun” without ever reaching it; “Harriet” becomes “Hurryet” and also the contemporary Black poet Harryette Mullen, shifting according to the bodies’ needs.
An epistle may be a letter—often meant for more than one reader—or an argument or assertion or coercion in the form of a letter, wearing a letter’s skin in order to get in. There’s a simultaneous sense of intimacy and an armed (many-armed) invasion of privacy. Do these e-pistols make me a sobject? Do they take me over, use me, fuse with me, expose me; do they wear me like a skin?
Sometimes. Reading the lines of these bodies, my strongest reaction is often to push back against them, not wanting them to be true, but having a hard time rejecting or resisting them entirely. They march me queasily to their truths: “There is a pleasure to the body torn to pieces.” (June 2013)

Purchase Poems Are the Only Real Bodies HERE.