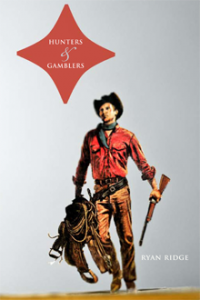 Ryan Ridge’s Hunters & Gamblers is a pure blast (of cocaine—what?! No!). It’s smart, funny, and entertaining. It’s blasting smartfuntainment and more. This collection of short fiction, featuring the novella Holiest of Holies, had me feeling super fine from start to finish. Ridge combines intelligence and playfulness like a mad chemist, and the concoctions explode in great and surprising ways.

From This Will Be The Prime Of You Unless You Round Up:

“There is strangeness in the past months. I get my haircut daily because it grows so fast. The barber is not afraid. I go to his shop. I sit in his chair. I say: ‘Are you afraid?’
‘No,’ he says, sharpening his scissors. ‘Unless by afraid you mean lonely.’”

Ridge riffs on history and modern times. The death of the American Dream is a steady beat throughout. In After Fall, he creates an eccentric dystopia where paratroopers armed with Tiki torches and whiskey pouches inspect rotting houses, families struggle to stay families, and girl scouts shake down anyone who opens their door:

Ridge grabs our shoulders and shakes out the tension for a while, then cranks things up a hard notch with his novella Holiest of Holies, a fast and furious romp featuring—among other things—a pastor, prison, wine, crack, a dude named Fang, a criminal father, a gambler mother, and a Centaur who seems to live on cocaine, er, Centaur Food:

“Tristan’s got a kickass job around here. Not only is she the Christian Rock Concert Coordinator, she’s Chief Curator at Holiest of Holies’ renowned art gallery. I’m envious. She’s nineteen, no college, already pulling in six plus. Me: Thirty-Three, PhD, and I had to fight like Ali for minimum. The world works in mysterious ways that aren’t really mysterious once you’ve examined them. Seems like so much hinges upon whom you fall out of.”

The final third of the book bends like a collective nostalgia of re-written histories, marriage, and tabloid tales.
From Something Nice, Something Gleaming:

“News kept breaking and no one could fix it.”

Overall, Ryan Ridge’s Hunters & Gamblers is a fantastic little ride. It’s smart but not pretentious. It’s fun but not too silly. The book itself, as a specimen, is marvelous. Dark Sky does not disappoint. From front cover to guts to back cover, they’re fast proving to be a major force in the world of indie lit. And Ridge, to be certain, is a sharp mofo, poking fun at a culture that’s forgotten how to poke fun at itself. I guess it’s safe to say that this is one of those timely books that come along every now and then that we should make a point not to miss. So don’t. (July 2011)