Review of Justin Sirois's FALCONS ON THE FLOOR 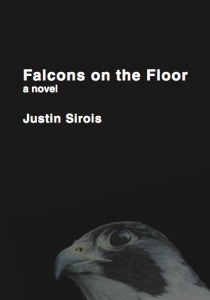 In his powerful and methodical novel, Sirois guides the reader on a three-day trek from Fallujah to Ramadi as two young Iraqis attempt to elude the violence that has become entrenched in their lives. Spurred by his desire to slip away from his contract work as a designer of propaganda for the Fedayeen—and to contact a woman he only knows via the internet—Salim prepares to set out on what he believes will be a solo journey until his longtime friend Khalil insists on accompanying him. Khalil has also done contract work for the Fedayeen, though mostly grunt work, and he is an accidental celebrity of sorts—he appears in a widely circulated photograph showing two brutally massacred men. Their journey takes them alongside the Euphrates River past ravaged vehicles and ravaged lives with Sirois zooming in and out of the minds of his characters as he deftly moves between first and third person narration. Throughout, Sirois strings a web of grand tension as the reader is constantly reminded, despite and even within the levity between the characters, that death is imminent. In the distance, motionless shapes become men with weapons. The water of the snaking Euphrates River while refreshing to one man grows poisonous to the other. Within the grand tension of the war that Sirois has wonderfully captured, there are great moments of tension built on smaller more personal scales for the characters. Alas, this tension too often dissipates because it’s never exploited, and a towering obstacle like crossing the Euphrates in an aged rowboat, for example, is too easily overcome. However, it’s a small gripe for this meticulously crafted tale, and in the final third of the novel Sirois quickens the pace, the danger, and so too the pulse of the reader. At times a buddy story with welcome flecks of humor, and at other times a beautiful and harsh meditation on war torn lives and landscapes, Falcons on the Floor is, in the end, an important and accessible tale of humanity struggling to maintain itself amid swirling chaos. (March 2012)

Purchase Falcons on the Floor HERE.