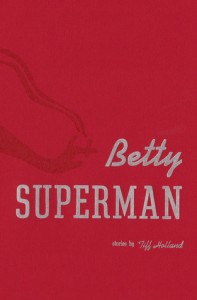 Stories spinning with family dysfunction never grow old, at least not to me, and they’re especially timeless when they’re as superbly written as the connected stories in Tiff Holland’s Betty Superman, winner of the Rose Metal Press Fifth Annual Short Short Chapbook Contest.

Holland’s collection is about adhesion, the often painful, grudging grip that can either suffocate or spur familial relationships, in this case a mother and daughter. The glue that holds family members together is a sticky requisite love, the kind of love you sometimes loathe to possess but that you cannot, no matter how hard you try or how badly you want to, put down. It’s what makes the dysfunctional functional. It’s what keeps thoughts of matricide just thoughts. It’s what forces us to sit still and remember who we are and the sometimes rough cuts from which we came. It’s love, simply, and the great mess that it can and will be.
The bullet prose of the opening story Dragon Lady sets a hard and fast pace while painting a hard and fast picture of a volatile mother riddled with insecurity and covered with calluses of time:

“What she wears: sweaters, tight over missile-silo brassieres. Pink. Yellow. Two pairs of support hose and open-toed shoes, even in winter. Estée Lauder perfume. Frills. Too much hairspray on her cotton candy hair. Make-up, every minute she is awake. False teeth. She had her real ones pulled when she was twenty. All of them. They were crooked. Then she tore up all the pictures of herself, all the sweater-girl pictures of herself in poodle skirts, smiling with her own teeth.”

In the throes of her insecurity—and I’m talking long throes that land us at her bedside as she sucks on an oxygen mask—the mother keeps a steady, pressing thumb on her daughter’s head, an attempt to keep her from growing, a way to afflict her with the regret and bitterness she carries. Perhaps her greatest fear isn’t her daughter’s success in life, whatever she perceives that to be, but what could follow should she attain that success, or even a hint of it. More than anything, the mother’s oppressive behavior over the years is meant to keep the daughter hamstrung and close. If not her daughter, who could she spit her secrets to? Who would understand her memories? Who could share that choked and damaged love? Who would, oddly enough, need and accept that particular brand of love?

“I’m beginning to reconsider encouraging her to tell me her secrets.”
And from Homing:

“She doesn’t rub the lipstick in the way she used to even when I was in my thirties, and I don’t rub it away either.”

Tiff Holland’s Betty Superman is about perseverance and loving the sometimes unlovable. It’s about accepting what we have, what we’ve been given. It’s about the ability to know when the wisdom we’re receiving isn’t good, and having the heart and patience needed to carry us across that threshold of understanding. (August 2011)