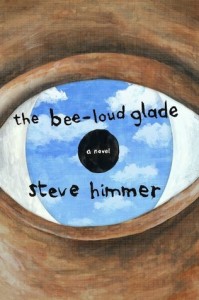 When I finished reading Steve Himmer’s debut novel The Bee-Loud Glade, I sighed, then chuckled, then said, “Well done, Steve.” And then I thought of the movie The Toy, the movie with Richard Pryor and Jackie Gleason. I haven’t seen that movie in ages, but it popped into my head as I reflected on what I’d just read.

The two stories are similar in that a wealthy eccentric hires a down-and-out man to do a very strange job. In The Toy, Gleason hires Pryor to be his bratty son’s plaything. In The Bee-Loud Glade, Mr. Crane hires Finch to live on his estate as a hermit. A what? Yes, that’s right—a hermit, and Finch’s job is to live in a cave, swim in a river, observe, meditate, and to, well, simply be, while in turn being observed by cameras hidden in bushes.

And as it turns out, this is more or less a dream job for Finch, the awkward, apathetic, detached, recently laid-off corporate drone. It’s an opportunity for him to re-create his life, and his outlook on life, in a manufactured Eden. And over time, Finch does just that, despite much prompting from his employer Mr. Crane to engage in new and odd tasks, and despite himself as well. Although Finch never forgets that he was hired to perform a job, it’s only when he completely immerses himself in his role that the artifice begins to slide off, just like his tunic, and Finch becomes the naked, solitary man he was meant to be.

That is, until Mr. Crane’s wife begins to drop by looking all sexy. And of course those two pesky hikers messing around in his garden. Oh and the lion.

The premise of The Bee-Loud Glade is a quirky one, to be sure, and Himmer handles it beautifully, touching on our addiction to reality TV, our waning sense of purpose, and our lack of appreciation for nature. It’s a thoughtful book but it’s hysterical, too, and on several occasions I woke my snoring cat because I was laughing so hard. Himmer is a very cerebral writer but he’s also very gentle, and his words move as effortlessly as the river in which Finch performs his daily swim.

Unfortunately, if The Bee-Loud Glade was ever made into a movie, we wouldn’t have Gleason or Pryor around to play the roles, but I’d throw down my votes for Alec Baldwin as Mr. Crane and either Will Ferrell or Jack Black as Finch. Yes indeed. And I’d be the first in line to buy a ticket. But until that happens I’ve got the book and my imagination. And that’s enough. For now. But I do hope Hollywood is listening. (April, 2011)