Review of Ethel Rohan's CUT THROUGH THE BONE 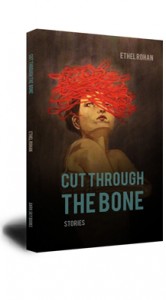 An entire chocolate cake. A gallon of espresso. A liter of Jameson. For the average person, it’s probably not wise to consume any of these things in one sitting, regardless of how tempting it might be. Ethel Rohan’s debut collection Cut Through The Bone should be read with that same restraint, because overindulging yourself on the words therein will have you rolling around on the floor, your bed, they’ll have you pacing the halls, holding your head in your hands, heartsick and longing. I should know, because I ate too much too quickly and it happened to me.

The stories in this collection—many only a few pages long—are extremely potent. Pungent. Deceptively rich. Like stepping into a puddle and being swallowed whole. Whoops. There goes your umbrella. Rohan writes about loss, about being trapped, about desperation, delusion. And she does so with a hand so steady you might think she’s a doctor slicing open a patient with a scalpel. And you’d be right, at least in part, because that’s precisely what she’s doing. Only you’re not simply observing. You’re the patient.

Visceral. The word visceral comes to mind. Rohan’s writing is exactly that, and it’s because she writes about things we all feel, that we’re all familiar with: loss and absence. Rohan explores the profound effect these two things have on the characters in her stories as individuals, within the family dynamic, and sometimes as complete strangers.

The collection establishes the themes of loss and absence immediately with More Than Gone, a story of a widow remembering her husband as she carries a purple balloon:

“Home, she kicks off her shoes and ties the balloon to the kitchen table. She pulls off her sweater and drapes it across Albert’s armchair, the chair such a comfort, such company, in the room. Her children want her to get rid of it. Never. She’d fall into the space it would leave behind.”

What’s interesting (and amazing) about this story is that the widow isn’t simply mediating on the loss of her husband, but she’s also mediating on his loss, the loss of his arm during the Korean War. It’s an excellent layer that adds to the connectedness of the characters here, whether present or not. Here, and throughout the collection, Rohan employs a technique reminiscent of Joyce’s Finnegan’s Wake, where the dead provoke the actions of the living, thus making them—ironically—integral, present players within the narrative.
In Makeover, a woman wrestles with an internal entity struggling to break free, an entity that longs to sing and dance:

“She was riding the bus, imagining herself in a boat on a colorful lake, singing with the dragonflies, when she first felt the woman try to get out of her chest.”

This story touches upon the sometimes crushing responsibilities that come with having a family. It also acts as a reminder of the necessary sacrifices we have to make in life, sacrifices that bubble to the surface time and again to punch, kick. In just a few short pages, Rohan captures the desperation of a dream being drowned and the claustrophobia of the prison cells we sometimes make, perhaps unwittingly, of our lives. However, the characters in Cut Through The Bone don’t always suffer and scream alone, and in that we can find some sense of togetherness, a collective limping along.

In Lifelike, a woman who longs for children becomes obsessed with dolls, and as a result her marriage threatens to crumble. Only when her husband is finally forced to understand her needs does he begin to see those very things deficient within himself:

“Maybe she could sleep with us tonight?” she asked.
He looked into his wife’s pale, startled face and saw a mix of fear and hope. He nodded. Her smile almost made his legs buckle.”

I found Under the Scalpel to be the most unsettling story of the collection, which truly says a lot considering this collection is teeming with unsettling stories. It was also one of the longer stories, thus leaving a very strong taste in my mouth. It follows the relationship of a mother and daughter—and the daughter’s family—after the mother’s plastic surgery, an act prompted by her husband having left her. But instead of a younger, smoother face, the surgery was horribly botched, thus leaving her more broken than before. The daughter, bound by love and obligation, takes her in, and the role-reversal becomes apparent:

“I led her back to the stairs. My lies echoed in the hall, came back to us. She felt so tiny inside my arm, fragile and childlike…”

This role-reversal is also echoed later in The Trip, a story about a daughter who takes her aging father on a trip to Galway. As the story progresses, we witness, as the daughter does, the terrifying state of her father, once a strong man but now threatening to be a hapless victim to time and dementia:

“I purchased the drinks, and waited. The creamy head on Dad’s pint started to brown. I found him flat on his back in the men’s bathroom, his head and torso under the sink, fixing a leaky pipe.”

This story is particularly heartbreaking because it invites us to laugh at times, even if uncomfortably.
However, there are moments of pure humor in this collection, and when they come they’re very much appreciated. In Fee Fi Fo Fum, a woman’s dentures are misplaced in a nursing home and she takes it upon herself to find a replacement set:

“She inserted the dentures, and tasted mist and baking soda and tobacco. She fought the rush of nausea. Recovered, she bared the dentures and tapped them together. They fit well enough. Her smile wasn’t hers, but it would do.”

While the overriding themes of this collection are loss and absence, and the characters shake, struggle, and slump, there are lightning moments of breaking free from the chains, of taking a stand, of acceptance—glimmers of true hope. In Cracking Open, a woman with an addiction to peanuts grows obese and begins decorating the house with peanut shells. When her husband threatens to leave her she breaks free from her misery and urges him to go, despite the fact that he finally witnesses her true beauty:

“In a rage, she jumped up and down. The house quaked and its contents teetered. Most of the peanut shells fell to the ground. She jumped and jumped, and sprang her skinny self out of her carcass.”

It’s an empowering story of slipping the noose of heavy thoughts and a dead marriage.

The stories in Cut Through The Bone are by no means pills to be taken lightly, but they are meant to be taken. Just don’t do what I did. Read this tight collection slowly and carefully. Savor it. Savor the black pills. Let them melt in your stomach. Let them move you. Let them inspire you. Let them remind you of what’s important in your life.

Ethel may write about loss and absence, but make no mistake, her book is very much present, and she’s a voice that’ll be around for a long, long time.

Purchase Cut Through the Bone HERE.