Review of Jason Jordan's CLOUD AND OTHER STORIES 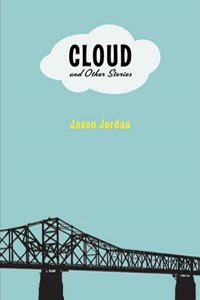 Death, a talking mailbox, a penis that longs to be an astronaut (don’t they all?), a bit more death, love, desperation, and an angel dressed in a Punisher T-shirt—these are just a few of the ingredients that Jason Jordan mixes in to his collection Cloud and Other Stories (Six Gallery Press, 2010). The overall result is a hearty stew of text best served with Doritos and washed down with Miller Lite. MMMM, stew.

While many of these stories seem content to simply entertain with their seamless magic (sur)realism—take, for instance, The Man with the House in the Sky (pg. 77), a lofty (ha!) tale about a man who does indeed have a house in the sky, accessed only by an extensive ladder—other stories seem more inclined to offer a bit of social commentary, most notably To Save the Dying (pg. 47), a tale in which Jordan paints a bleak picture of working class Americans trying to remain hopeful in a small town ravaged by time and recession. The latter is a sad and crushing tale that, in my mind, carries the often recurring themes of loss and death with a greater maturity than other stories in this collection.

But don’t get me wrong. Silliness can carry weight too. In Babies Always Have It Coming (pg. 61), the narrator muses on the responsibilities of parenthood, and, deciding he’s tired of it, actually brings the baby back to the store from which it was bought to exchange it for a cat. This story in particular is a great knock on the sometimes apathetic mindset of the now surging Millennial generation—or on any generation, or any individual prone to laziness, although I have a special place in my heart these days for Millennials—just as My Better Half (pg. 102) is a great condemnation of the pharmaceutical industry. However, it’s not just pills that are taken to task here. Jordan pokes at an elaborate service that requires its customers to take pills so they might cut themselves in half in order to better multitask. The pills provide temporary regenerative abilities, and soon the narrator finds himself living with a lazier version of himself. It’s funny and smart, and the message that there are no easy fixes in life rings clear and true.

The weaknesses within the collection arise when Jordan experiments with text. It doesn’t happen often, but there were times I found myself scratching my head. In Surviving (pg. 53), Jordan marks the segments within the narrative with individual letters, a clever device used to spell out a message to the reader. It’s not that I completely disliked the experimentation here, it’s just that it was predictable and a bit of a distraction. And in The Pink Light Bulb (pg. 143), Jordan employs massive amounts of white space and repetition. It’s also an interesting bit of experimentation that, I think, could’ve been executed with a bit more concision. As it stands, small blocks of text float on a sea of white on one page, and on the next page (and the next) the repeated word “SOUNDS” fills every square inch, barring the margins. Perhaps I’m an isolated case, but the intended effect of this experimentation was simply lost on me.

The greatest strength of these stories lies in Jordan’s ability to build tension. He’s a true master, quickly pulling readers in and then taking them on fantastical journeys. Working class characters and small towns come to life and then dance, sometimes humorously, sometimes tragically, but always with great heart, even if their hearts are challenged.

Overall, Cloud and Other Stories is an extremely well-built and entertaining read from a young author who is just warming up.

Purchase Cloud and Other Stories HERE.