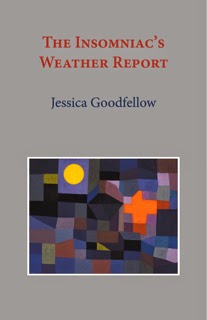 Jessica Goodfellow's The Insomniac's Weather Report envelopes you in its haze, twists you up in its entwined questions, and holds the answers maddeningly just out of your reach. Like the poems themselves, you feel always about to grasp something solid and definite, only to have it evaporate under your fingers, ideas and phrases circling back on themselves.

As Goodfellow writes in "Frost":
Ice embossed on grass is easily chased

Don't ask the sleepless one what he has lost.
As she writes in the opening poem, "Why the River Flows Away from Its Source":
See, there is no water in this poem.

Eluded by sleep, by solid ground, by orderly trains of thought, Goodfellow plays recurring themes and ideas against each other in varying combinations throughout the book, punctuating them with small, clear moments, memories, stray bits of conversation. This culminates in the book's final section, "Alphabet: Fugue:", a group of poems strung together by their subjects like a delicate chain.

In "Form: Shadow:" Goodfellow echoes the linked structure of the titles:

A sacred property of glass is translucence.

An unlucky property of glass is translucence. Light's

entrance is also its exit: moon trapped in revolving door.

An unlucky property of breath is translucence. The visible

That is not to say that the mood of the collection or its repetition robs it of power, or of precision. As incorporeal as her subject matter may be, Goodfellow's construction and choice are exact and apparent. The structure of the poems varies from couplets to chunks of prose, but each individual piece is well-balanced and has a form serving function. Goodfellow gives the reader dozens of new angles from which to examine her themes, each a new opportunity to try to put things in order, to see them clearly.

With this collection, Goodfellow invites you into a small world of sleep (or the pursuit of it), wind, rain, music, math, birds, and chaos. The same things return in new formations, burrowing their way into your mind, so even though you've finished reading, you are still thinking about them, vaguely but persistently, unable to pin down any single one. (May 2014)