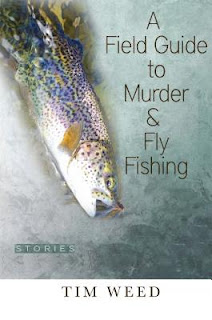 Everyday people fill the short fiction of Tim Weed’s A Field Guide to Murder & Fly Fishing. Such is the case of the man teaching his son and nephew how to fish in “The Camp at Cutthroat Lake.” Their rite of passage is so common that we are unprepared for the dramatic impact that their story will have on us. Weed’s characters are not remarkable. What they are is real. The two high school misfits whose friendship and experiments with LSD are delineated in “Tower Eight” are labeled “freaks” by their peers. The Deadhead in “Steal Your Face” leaves his girlfriend to re-experience a vision induced by dropping acid at a Grateful Dead concert. The ex-patriot photographer in “Foreigner” becomes enamored with a Spanish woman when she mimics his American accent. Cheeks aglow and snow dusted from a glove convince Henry, in “Diamondback Mountain,” that an Italian actress is his soul mate. Working at a remote skiing lodge in the 1930’s, Henry wrestles with doubts about his self-worth as he squeezes meaning out of casual conversation. Only the husband in “Keepers” is successful in love. But Weed’s stories are never simply about the plot. They are also studies in character.
Time and again, Weed creates suspense within what are seemingly common moments.  Events plucked from the humdrum, moments which ought not to be significant, but are. In “A Winter Break in Rome,” a student falls under the “spell” of an American co-ed. Insecurity and pride goad the characters on. Having landed a summer job laying cable, the student in “Six Feet Under the Prairie” antagonizes an older crew member. Confronted with an obnoxious client, the fishing guide in “The Afternoon Client” gives as good as he gets in an escalating game of one-upmanship. In “Scrimshaw,” the young carpenter who, for reasons he cannot fathom, has never been a good “fit” with prior employers, is given a chance by his foreman. We see the upcoming train wrecks before they do. But so too do those who view them from within their fictional world. The tour guide in “The Money Pill” cannot help but see the disgust written all over the “big mustachioed face” of his taxi driver. In “Mouth of the Tropics,” a research biologist becomes “uncomfortably self-conscious” as a group of Ye’kwana children watch him steer away from their village: “it was if they were sitting in judgment, or knew something about himself that he did not.”
As readers, we have been given passports into Tim Weed’s fictional worlds. We can, if we wish, stand next to the turntable in the small bedroom in “The Money Pill.” We can watch impassively as the younger brother in “The Dragon of Conchagua” grabs hold of tussocks of long grass growing out of congealed lava. We cannot alter the fates of those we have joined but, if we give them a chance, they could alter ours. (April 2017)