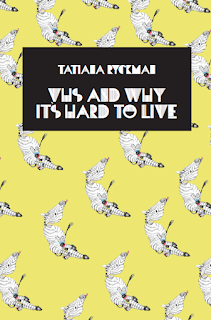 VHS and Why It’s Hard to Live

You’re running late to an event, and you join a program already in progress. You missed the introductions, the keynote speaker, the crudite platter is picked over. The people on stage now keep referring to presentations you didn’t catch. And then, without warning, you’re called up and asked to speak. If you happened to have just read Tatiana Ryckman’s VHS and Why It’s Hard to Live, you’ll be prepared for this moment.
VHS, a chapbook-length collection of short essays, is a testament to the incomplete information we start with, and the warped knowledge we accumulate. Take for example “Anne of Green Gables,” which begins, “In High School I aspired to be anorexic or bulimic, but the truth is I just wasn’t motivated enough.” Taking inspiration from the beloved and wholesome literary character, Ryckman sets off with a bottle of ipecac syrup and ends in a misadventure a contemporary Anne would be proud of.
Ryckman’s essays show that growing up is a process that can last a lifetime. In “VHS v Beta” her parents buy a Betamax videotape player, a decision that still impacts Ryckman to this day, with “a deep, sickening nervousness every time we face a new VSH v Beta, like Blu-ray and HD, because one side always has to lose...” In “Biology Class,” she enjoys a moment of smug reflection when she schools a friend on the nuances of the female body. “To discover something so new in your body as an adult, I thought, must be terrifying.” But years later she realizes that she might have some uncharted territory of her own. It’s these misplaced allegiances and confused notions that make Ryckman’s essays so enjoyable to read. It’s not just you, they seem to say, it’s everyone—but each with our own embarrassing subtleties.

Ryckman zips us around a world that seems familiar, pointing out hidden features we didn’t know to look for. Gilligan’s Island and 90s cartoon Gargoyles, Doritos delivery trucks and Cleveland microbreweries are some of the highlights on her tour. The world that we know is flawed and incomplete. As we go, Ryckman helps us erase and recreate bits of knowledge, leaving us with a view that looks even more distorted and confusing than before. Not even a cornfield in Ohio is immune, as we listen, in “Funeral Song,” to “an eerie melody of normalness.”
Reading VHS, you will stop to consider topics you might not have planned on encountering. Is renters insurance a scam? Will Gilligan get off the island? “Will future generations miss out on the acid trip-esque experience of suddenly realizing everything they believed to be true has always been something else entirely?” The answers as I currently understand them are no, no, and let’s hope not. With Ryckman as a guide, it seems the real real world is not as scary as it seems. As she confidently tells us, “People are nicer than you think they are. I mean, people are nicer than I thought they were.” So as you stand on the stage, blinking at the audience, whatever you end up saying will be just fine. Nobody really knows what’s going on anyway. (June 2016)

Purchase VHS and Why It’s Hard to Live HERE.

Reviewer bio: Jeannie Hoag's chapbook of poems, New Age of Ferociousness, was published by Agnes Fox Press, and her work has recently appeared in Divine Magnet.