Review of Farideh Razi’s Vis & I 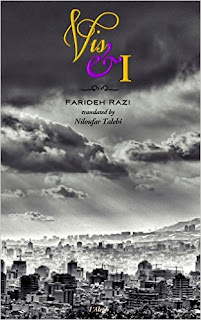 
Farideh Razi’s Vis & I takes place during the Iran-Iraq War. The plot of the novel is simple: At 2:20 a.m., Pardis makes a last ditch effort to intercept Ramin at the Tehran Airport before he flies out at 3:30. Riding in the back of the taxi, Pardis experiences a series of flashbacks as fire-flowers blossom on the night sky. Aware of “the driver’s crusty eyes” watching her “incredulously from … the mirror,” Pardis realizes that she is “talking out loud.” She is falling apart, with former crises erupting into the present, each flashback flaring and illuminating some aspect of her past.
Most of Pardis’ flashbacks depict the lived experience of the Iranian middle class during the 1980’s. References are made to the minutiae of war: the power goes out several times a day, gas and car parts are rationed, and a woman searches the rubble for her son. At this point, the novel could be set during any modern war. Read further and the field narrows. Pardis, the main character, pines for the days when they sunbathed, the days when she taught, when her lover composed and their friend, Ahmad, wrote. Glimmerings of Khomeini’s Iran, with its persecution of its intellectuals and oppression of women, begin to surface. She remembers visiting their friend Ahmad, on whose head “they” had “trickled monotonous drops of water, drop by drop.” He was, she noted, “without spark, or words.” Venturing outside to enjoy the night sounds, she and Ramin are set upon by security guards and “are caught among brutal hands and arms taking their turns.” The driver drives. Bombs fall.  Pardis, whether she knows it or not, is “without spark, or words.”
Sparkling with life, Vis is a heroine plucked from an eleventh-century verse epic called Vis & Ramin. You would expect a fictional character who has crossed from the creative work of one author into another to be out of sync. She is. Yet, she is real. Pardis may be the only one who sees her but she sees her tugging a sheet off of Ramin’s head. Moreover, she pushes Pardis to take concrete steps to salvage her relationship with Ramin. She defies fear. When Pardis hears the rumble of a squadron of planes overhead, Vis chants the verse of her creator, evoking the beating hooves that bore Ghengis Khan’s horde into Persia, as if to say, “there is more to life and the history of Persia than this brutal war.”
The potency of Vis & I will no doubt be greater for readers who are better-acquainted with the trauma experienced by those who suffered under Khomeini. Much was prohibited, and activities, such as sunbathing, were relegated to the imagination. You cannot fault any of the novel’s facets. Several of the passages, such as the exchange between Pardis and the taxi driver, are priceless. It is an admirable accomplishment, as well as a genuine work of art. (March 2017)