Interview with the author: Ben Hersey 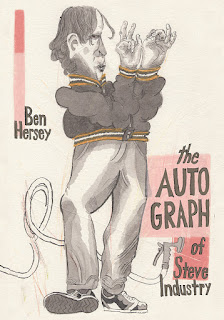 Ben Hersey is a writer & performer who lives in Easthampton, Massachusetts. His book, The Autograph of Steve Industry, was published by Magic Helicopter Press. Recently I connected with Ben to learn about his book, the stage antics of his old band Viking Funeral, and what Massachusetts means to him.

Mel Bosworth: You wrote a book!

Ben Hersey: Yup. Years in the making. Steamrollers was/is a real band. Been around since at least 2000, played about 30 shows, at most. We write all the songs (more or less) live and pretend that we're a shitty bar band in a shitty venue somewhere north of Boston. I got really excited by the weird shit that was coming out of our shows and started taking notes and arranging a series of possible stories around this character I played in the band. The character took off. Lots of live shows and years stewing in the gore of Mass culture and history.

MB: You good at pool?

BH: Not good at pool. In the mid 90's I spent so many nights in a grungy candle-pin bowling alley / pool hall in Malden that we all just called "Charles St." I'd stare at pool tables and the games people played and got to know the people playing and the jukebox music (Crimson and Clover, Hotel California) but I never played. Never felt the game speak to me. Pool was never as interesting to me as the people playing it and the situations going on in the cigarette smoke with the filth on the floor and the walls. I went there again and again. I loved it there for awhile. 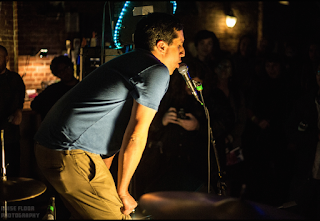 BH: Music's a friend. I've been in lots of bands. I was in a band called Viking Funeral. We played two or three shows. I think it was our last show that was in this big crowded loft in Northampton. Shortly after we shaved our chests, the bass player shot a fire-extinguisher into the air above the audience. The room filled with a chemical cloud that seemed to self-expand. Obviously the room mostly emptied, but we continued to play. I remember spitting and gagging and carrying on. We were young!

MB: You ever for real know a guy named Gardenhose?

BH: Nah, kid. Lotsa Derricks. Buncha Mikes. Buncha know-it-alls, buncha sonnofabitches. Buncha mechanics and athletes and drunks and drug addicts. All good people even when they fuckin sucked. I'm so glad those old days are behind me, but I'm so grateful for them, too.

MB: What is it with Massachusetts? Eastern or Western?

BH: Massachusetts is my physical and spiritual epicenter. Both sides have very different meanings for me. Eastern is my homeland, my birthplace, the site of all my personal disasters and agonies growing up. I wanted to explore the pulverizing effect of regional pressure on individuality. If you're not one of us, go fuck yourself, kind of attitude that thrives—or at least thrived—in Malden growing up. I think that's probably changed since I've been gone. Western MA is the place I escaped to and it's the place I discovered how to be myself, how to be creative in communities where people were off the charts crazy, exploring weird zones nonstop. I learned so much about trusting the inner genius watching, listening to and collaborating with so many dedicated artists out here. I love both sides, but western Mass has been home for a long time and I'm happy about that. The root of my being comes out of greater Boston, but I love it here.

MB: The end of the book is deeply moving and satisfying. Nicely done! You ever been to the Hoosac tunnel?

BH: Yeah, I been there! It's a spooky place that feels like it shouldn't exist. It's like if you trekked down a mountain into a wet New England valley to see a lion in a cage or something. It feels like it just shouldn't be there. There's something about it that forgot to die.

BH: Pre-Trump, I mostly could. Freakish, inborn optimism mixed with a healthy familiarity with personal tragedy seemed to give me a frame of mind where I could treat most situations like an opportunity to learn something. I know that's all still there, but now everything feels so much more urgent/confusing/new. He's been president-elect for a month or so and I've been so obsessed studying the contours of the chaos that seems to be on the horizon, that I'm already starting to feel tired. How much is too much? How much too little? How do activists not burn the fuck out? I need training.

BH: We went very hard at some pizza slices. 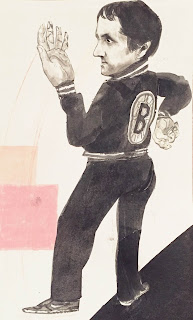 BH: Too many good options to narrow it down. It's some combination of "Go fuck yourself," mixed with "Give up all hope of fruition," rolled into "Nothing lasts," wrapped up in Rammellzee saying from behind one of those mythological toy-masks, "give."

BH: I just want to reconfigure everything I write and my performance work to somehow more productively contribute to a resistance against what seems like world-conflagration. Want to continue to listen and to serve the future. Want to be a friend and a force. Want to continue to cultivate a role as a teacher and to help people do good works. Don't know what my performance work will look like in this new context, but I'm getting ready to creep back out there, I think. I have a chapbook type thing of performance scripts from the last year or so and a mountain of written fragments related to a history of Maine. Not sure what place any of this has, but I'm committed to continue making, creating, teaching, parenting, as part of my life-work as a world citizen. I have so, so, so, much work to do.

Read a review of The Autograph of Steve Industry HERE.