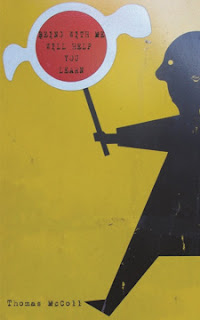 Being With Me Will Help You Learn

In his book of poems Being With Me Will Help You Learn, Thomas McColl plunges head first into a strange world that seems so much like our own yet entirely nuanced. The title itself is slightly foreboding, as if what we, as readers, are about the read will change us in some profound way, some way that will fundamentally change the way we perceive and react to things in our lives. McColl uses cunning and smart language to create these quasi-worlds that mirror our own. He does this, all the while lacing his poems with dark humor. It’s a kind of make-believe that isn’t quite made up.
Many of McColl’s poems read satirical. Among these poems is “A Warning to All EC Pedestrians” where a simple practice of walking across the street turns into a humorous yet sinister act. McColl uses this sense of parallelism to change the dynamic between cars and pedestrians. He writes,

Pedestrians planning to cross the road
must have, as standard,
an air bag beneath their clothes
which will blow up on impact.

McColl has switched attributes, such as airbags, license plates, and speed limits, from cars to pedestrians. He has created this universe where there are still vehicles and people, yet their roles and responsibilities have swapped.
He continues his brand of humor in “The Nose Picker Public Enemy Number 1”. The title embodies much of the poem—nose pickers are deemed dangerous criminals who must be apprehended and incarcerated. McColl takes an unhygienic habit and gives it the kind of gravity and severity of someone who has committed a great crime, such as murder. The narrator of the poem describes the scene of a man being dragged into the street by police because he picked his nose. The first stanza ends with,

he was surrounded and restrained while forensic experts, quickly on the scene, still putting on their rubber gloves as they jumped from the back of their van, wiped his finger clean of mucus.

While seemingly laughable and ironic, there is unease within McColl’s words. The severity of the actions taken against this young man make the reader contemplate the marriage of the action and punishment.
As the collection progresses, McColl’s poems become increasingly profound. Within “In Search of Pedestrianland”, McColl uses the classic tale of The Wizard of Oz as a lens through which to view ecological or even societal questions. The poem focuses on Dorothy who dreams of “Pedestrianland”, a place without cars, engines, or anything to impede the way of pedestrians. The wicked witch in this poem boils hot tar in her cauldron to pave new roads for cars which are driven by demons. He writes,

The only dreamer left on Earth is Dorothy:
While the scarecrow’s off to see the wizard,
who runs a driving school on Baker Street,
Dorothy makes do with the Good Fairy’s magic boots,
and lives inside her head
in fantasy Pedestrianland,
where the cars and motorbikes she hates
are banned.

Again, McColl brings about this interesting relationship with pedestrians and vehicles. Is he drawing attention to the environmental destruction done by gasoline emissions and the paving of roads?  Or is he once again exploring the difficult and dangerous relationship between pedestrians and vehicles?
One of McColl’s most striking poems is “Robot”. As the title proclaims, it is a narrator who is presumably a robot, talking about certain aspects of being a piece of machinery. Again, what might sound light hearted and whimsical turns into an introspective view of human sadness.  McColl writes,

I constantly malfunction:
Sometimes I de-activate,
My head slumps,
Will remain like this for minutes at a time,
At work, in the street, alone in my bed-sit.

Oil constantly seeps through my eyes,
And down my face…

He uses the concept of the robot as a vehicle to discuss personal dysfunction—he digs deep into the human psyche and personal dissatisfaction. Likening oil to tears illustrates this idea that we’re all human, despite our best efforts to hide the fact. It is a kind of imagery that brings the intangible feelings that many people have to endure on a daily basis into much more visual space.
Much of McColl’s poetry has hidden meaning, relating back to the kind of struggles humans endure day to day. He draws upon the small seemingly insignificant things and creates a whole new world in each poem. McColl’s use of smart, intelligent language, compounded with his attention for detail, allows him to construct poems through which we can examine ourselves and the world we call home. (January 2016)

Purchase Being With Me Will Help You Learn HERE.