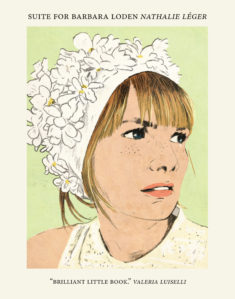 “I believe there is a miracle in Wanda,” wrote Marguerite Duras of the only film American actress Barbara Loden ever wrote and directed. “Usually, there is a distance between representation and text, subject and action. Here that distance is completely eradicated.”

A film more famous in our time than in the year it was released, Barbara Loden’s sole filmed work as writer and director went from an affront to American feminists—how dare a woman filmmaker represent a woman as a passive pawn in her own life!—to a smash reception at the 31st Venice International Film Festival, where it took Best Foreign Film honors—as the only American entrant accepted that year. Honestly, it might as well have been a foreign film right here in the USA for all the attention it received in the 1970s.

Loden was an actress who was famous if you knew who she was. She was the leggy, semi-clothed blonde bombshell sidekick to sophisticated sketch and improvisational comedian Ernie Kovacs on his critical darling of a revue show. She won a Tony Award in 1964 for playing a thinly disguised take on Marilyn Monroe in an Arthur Miller play. She was a featured actress in several of second husband Elia Kazan’s films (eg, Splendor in the Grass). Her Method acting was learned at the Actors’ Studio while she was a teen-aged dancer at the famed Copacabana nightclub. This was a woman of formidable ability and negligible self-confidence who, paradoxically, married two high-powered men (her first husband was film and television project distributor Larry Joachim, a major player in the early years of television) and left each of them yearning for the strength to control her.

French author Nathalie Léger is introduced to this subject of obsessive interest by a writing assignment: Create a composite entry for Loden and her single outing as a writer/director for inclusion in a film encyclopedia. Léger tells us that she got the instruction from said editor, “No need to put your heart and soul into it.” Sounds to me as though this was not the editor’s first go-round with Mme Léger. That was possibly the most wasted breath the editor had ever used to form speech. “I was trying to be as objective and rigorous as possible. To describe and only to describe, in as few words as possible,” says Léger of beginning her research. Instead, this encyclopedia entry blossoms into a combination personal essay, critical assessment of film, director, and star, and miniature biography of a minor player in the film world with a major talent.

At the very most, I’d expect someone charged with writing an encyclopedia entry to visit a film-school library, see if the subject’s only film was available in some format and give it a watch, at the extravagant end spend the money for an international phone call to an easy-to-locate colleague of Loden’s who was still living at the time. Léger flies to Pennsylvania’s coal country, the setting of the film; contacts film scholars in the USA as well as famous French star of the same era as Loden, Isabelle Huppert; haunts the late Loden’s son, who possesses “twenty-five boxes” of material on his mother and (not unreasonably to me) wants to know what specifically or even generally Léger is looking for; and can’t articulate to any of them precisely what it is she is seeking. I have the sense that, even as this beautiful and intimate mixed portrait of Loden, Wanda, and Léger was going to press, she wouldn’t have been able to articulate precisely what the purpose of her journey was except in terms of its result.

Loden and Léger are each on a road trip towards some sort of epiphany. Loden’s, as Wanda, is going to be fraught with the usual sort of misery and pointless, purposeless suffering that is the lot of the intellectually ungifted when they come unmoored from whatever habits and relationships they’ve tangled themselves into. Léger’s road trip is guided by that savior of the directionless, GPS:

Sky. The ocean floor. The earth’s gravity field. Lines, measurements, a shape, a time. What the experts call the figure of the earth. I don’t want to know any more. I allow myself to be guided; I don’t understand the organized collusion of data transformed into electromagnetic waves that come crashing mathematically into the rental car’s black box to dictate my itinerary. I’ve muted the sound; heading into this unknown country I rely only on the image of the infinite ribbon unspooling on the GPS screen. No obstacles, a marvelous, illusory continuity, the perfect representation of stupidity—what others might call an acceptable representation of reality. “The magic box,” the mechanic had said. I have heard that the GPS is altering our perception of our position in space and the way we travel from place to place. The very notion of an itinerary is problematic nowadays; some people go so far as to believe that everything, including time and emotions, can be localized. It seems to be becoming increasingly difficult to accept that we don’t always know exactly where we are, and by extension it is becoming increasingly difficult to know exactly where we are.

Where in the world is Léger? She’s lost; or she’s not found, anyway, not by the spirit she seeks so assiduously that, instead of knocking out two hundred fifty words or so on a minor player in the film world, she knocks on time’s doors and bangs her shins on the invisible furniture in the dark theaters where Wanda isn’t playing.

It is a very good film, if you’d care to watch its 102 minutes. Cinema vérité isn’t everyone’s cup of tea, and while the ample-for-its-day budget of $110,000 is spent so that it shows on camera the seedy underbelly of the American Dream is pretty much intact and uncomfortably familiar. The upholstery is different colors and the TVs have flat screens. All of Wanda’s acting is done by Loden and her man, Michael Higgins; as Mr. Dennis, he’s the latest loser to tow her long behind him. He’s enough of an improvement over the husband she didn’t so much leave as simply drop and forget to pick up that Wanda makes every attempt to stay with him as his petty little control tactics become more and more desperate (throwing a new pair of slacks out the car window because “no slacks when you’re with me,” and “no curlers, they make you look cheap; do you wanna look cheap?”) as his unrevealed criminal plan begins to crack open. But for Wanda this is the big time, this is freedom from the hideous coal-mining burgs of her entire life, from kids she doesn’t care about, from people who know her and despise her. Author Léger relates this barren freedom to her own mother’s life, and does so in a way that makes clear what those 1970s American feminists were testy about: At every turn, these women exist, actually exist, only in relation to the plans and persons of their men.

The bleak truth is that many women in 2016 are in the same boat. Wanda’s cult classic status among the most sophisticated cinephiles does not make the subject matter more comfortable for today’s energetic and ever-more-successful activists to watch. And Léger, by writing a beautiful film critique mixed with a biographical sketch and a patch or two of memoir, has used artful image juxtapositions to create the unsettling but unignorable truth behind all of these stories. (October 2016)

Reviewer bio: Richard Derus (aka @ExpendableMudge on Twitter and Medium) is a biblioholic, a tsundoku carrier, and a passionate reader. From underneath his tottering towers of unread tomes, he writes obsessively about his darlings at Expendable Mudge Muses Aloud, where many otherwise unknown books are praised, panned, or poked fun at; The Oak Wheel, where he blogs enthusiastically about short story collections; Shelf Inflicted (where he was a founding blogger); and wherever else he can find editors who need content, as long as it’s about books.