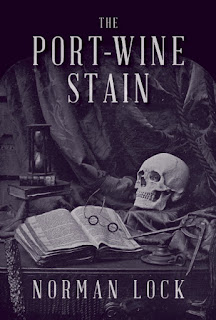 The Publisher Says: In his third book of The American Novels series, Norman Lock recounts the story of a young Philadelphian, Edward Fenzil, who, in the winter of 1844, falls under the sway of two luminaries of the nineteenth-century grotesque imagination: Thomas Dent Mütter, a surgeon and collector of medical “curiosities,” and Edgar Allan Poe. As Fenzil struggles against the powerful wills that would usurp his identity, including that of his own malevolent doppelgänger, he loses his mind and his story to another.

My Review: I’ve read other reviews in the book-blogosphere that were, shall we say, indicative of a certain disappointment in the blogger’s experience reading The Port-Wine Stain. I am not among these bloggers. I liked the book. In fact, I liked it the best of The American Novels cycle that Bellevue Literary Press will be publishing through 2018. I asked their publicist for all of them published so far, since I was that curious about Lock’s aims. When they arrived (thanks again!), I started from book 1, The Boy in His Winter, which wasn’t a favorite of mine; American Meteor, second in the cycle, which definitely was a favorite of mine; so now, by book three, I think I might have absorbed a sense of purpose and a trust in Lock’s craftsmanship and artistry that others might not have the advantage of possessing.

Or maybe I just have really good taste. This book was shivery-good.

He knocked absurdly on the skull like a man impatient for a door to open. His eyes glazed over. He appeared to be in the grasp of something beyond the reach of ordinary mortals.
“Time is slowing,” he said in a leaden voice. “Each moment grows and fattens like a drop of rain on a window sash, waiting to fall.”

That’s Poe upon visiting our invented narrator, Mr. Edward Fenzil, aged nineteen and of ignoble stock, who has been gifted with a leg-up in the world by becoming bone-keeper in Dr. Thomas Dent Mütter’s medical school. Does it feel over-the-top to you? Then forevermore don’t read Poe himself! As Edward dusts skulls, Dr. Mütter gives him what amount to private lectures. It was required that he clean the operating theater after surgeries, but he was also always within reach of the great man, could pose questions, and assist the doctor with his researches on different scientific subjects.

Dr. Mütter also encourages a closeness between Edward and Edgar, saying the friendship will benefit Edward by allowing him to observe closely the workings of “the pathological mind.” But in any meddling mentor’s files there are innumerable cases like this, where the intent and the result are at opposite poles. Edgar is a man of the world, a gentleman, and overawes young Edward. It wouldn’t have been difficult, considering Edward’s youth and (in the time period) it wouldn’t be any surprise for a lower-class lad to be unfamiliar with any gentility or mannerliness.

Poe’s proffered friendship has a profound impact on Edward in so many ways. As Edgar introduces Edward to every strange corner of the city of Philadelphia, he (deliberately?) changes the young man forever:

While I knew him, he made me see—Poe did; made me understand that, unlike a bodily organ, the soul desires, even wills, its own continuance.  It can be said to be the seat of will and desire and, even in its necrotic state, the root of evil. ... A Sunday school lesson or one of Cotton Mather's gaudy rants that helped to kindle the Salem bonfires is nearer to the truth of it than a fable by Poe, Hawthorne, or Melville. Evil's a malignancy beyond the skill and scalpel of {doctors} to heal or extirpate.

I’m in sympathy with this view, and would be converted to it after learning one of Poe’s lessons for Edward. In order to become a member of Poe’s Thanatopsis Society, Edward is subjected to an appalling initiation ritual involving the young man proving he is worthy of ritual transformation into a death god. Needless to say, Edward is traumatized by the nature of the initiation. So was I when I read it. The tone of the novel becomes decidedly darker after this event, matching the mental agitation of the narrator telling his story some thirty-five years and the Civil War between him and it.

No, I’m not going to reveal the ritual. Suffice it to say that anyone familiar with Poe’s stories will recognize it and feel the same horrified, claustrophobic feelings they had when it they first encountered it. You’ll know when you get there. After the traumatized Edward runs out of the Thanatopsis Club, vowing never to return, he seeks comfort in a local whorehouse, only his second visit and experience of sex. He describes it to Moran in disturbing detail, offering details that would elicit a “TMI! TMI!” from most people, myself included. But rely on Lock to stir you up, rile your easily offended inner maiden auntie:

Ravished is a nice word found in sentimental novel. Between us, Moran, the word that stuck in my mind like shit to the bottom of a shoe was fucked.

And there it is. Why I have come to enjoy so much reading Norman Lock’s writing. It is never all one thing, one note, one temperament of that note. I value this highly because I see so many earnestly presented stories chipped and chipped and finally cracked into a pile of who-cares-dust. Offend me, anger me, and I might or might not pick up another of your books; bore me and we’re done here, this conversation is over.

Meanwhile back in Philadelphia, Edgar realizes he has taken a step much too far by subjecting Edward to what he did. Edward has spent the intervening time vowing never, never, never, so as all the adults in the room know, Edward’s still infatuated with Poe and all he knows, does, and represents. Their make-up meeting, encouraged by Dr. Mütter himself which guarantees it will occur, seems to show Edward that Edgar is genuinely regretful:

“Forgive me,” Poe repeated earnestly.
I nodded coldly. I was not above acting like a child; I was hardly more than one.
“I want you to have this,” he said, fishing a gold watch and chain from his pocket. He took a step toward me. I stood my ground. He closed the distance between us, the timepiece in his hand. “It belonged to my father, David Poe—not John Allan, who fostered me but would not adopt me. My real father was David Poe, Jr., the actor. It's said that he abandoned my mother and me. It's a lie. He died--too young: He was only twenty-seven.”

I accepted his gift. It felt substantial in my hand. In spite of myself, I was pleased to have it.

The darkest turn the friendship is ever to take comes not long after the earnest apology Edgar offers, and again at a meeting of the Thanatopsis Club. Edgar has been subtly preparing us, Edward included, for a genuine and unnerving crisis. Each of his acts before this has been explainable, but this one is simply and purely cruel, evil and cruel. The concept of the doppelgänger is a bit unnerving, to be sure: A person unrelated to yourself whose appearance, and sometimes behavior, is as close as possible without being identical twins. Placed in the hands of an unscrupulous man, knowledge of another person’s doppelgänger’s whereabouts can lead to nasty mischief. Edgar having found Edward’s doppelgänger in the form of a hanged murderer, whose likeness to Edward is marred only by a port-wine stain.

Here begins Edward’s descent from nervous wreck to madman. Edgar and everyone around him will not let Edward’s fearful brain slow down for so much as a moment, playing tricks and (in Poe’s case) writing a story about an unfortunate young man named Edward who fancies he has a port-wine stain, which spreads and spreads, and...the story is incomplete. He steals the story in a fit of rage, and bewails ever having laid eyes upon Edgar Allan Poe. Edward’s unbalanced state sinks further as Edgar shows his genuine lack of human kindness by treating Edward’s fears of the port-wine stain merely as evidence of his theft and guilt.

It is a profoundly painful ending for the book, resolving Edward’s story as confinement to the best possible care in a madhouse paid for by Dr. Mütter; released after six months, returning to his former position; his medical degree paid for, as a gift, by the Good Doctor; service as a field surgeon in the Civil War; finally, after a long life, tending the needs of a few established patients such as Walt Whitman, whose impression upon Stephen Moran in American Meteor was so very intense and is the link between Dr. Edward Fenzil and his audience Moran that is at the heart of Lock’s choice of narrative style.

Dr. Fenzil thanks Moran for listening to him ramble, and for ignoring his disfigurement by the port-wine stain he carries as a reminder of a toxic friendship of long ago. (June 2016)

Reviewer bio: Richard Derus (aka Expendable Mudge) is a biblioholic, a tsundoku carrier, and a passionate reader. From underneath his tottering towers of unread tomes, he writes obsessively about his darlings at Expendable Mudge Muses Aloud, where many otherwise unknown books are praised, panned, or poked fun at; The Oak Wheel, where he blogs enthusiastically about short story collections; The Small Press Book Review, Shelf Inflicted (where he was a founding blogger), and Lambda Literary.