Review of Jon-Michael Frank’s HOW’S EVERYTHING GOING? NOT GOOD 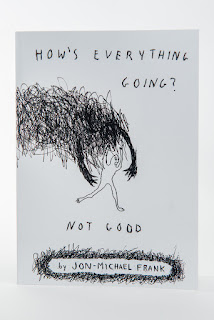 HOW’S EVERYTHING GOING? NOT GOOD

For a book whose title could stand in for any given day of content on Google News, Jon-Michael Frank’s collection of one-panel poem-drawings, How’s Everything Going? Not Good, curiously and perhaps mercifully contains not a single topical reference. Anything like a reflection on political or economic matters has to be taken through inference, from the sly reverberations of these ragged, inward-looking and uniquely affecting scrawls.

In keeping with the drawing style, the accompanying text is direct and biting, rarely more than a handful of words. As we might pick up from the early drawings (i.e., image: spotty banana / text: THE ORGANIC THING TO DO IS DIE), these pieces make use of big, basic motifs: death, water, the heart. Frank’s simple but startling constructions return to these motifs over and over again, as if gently insisting we look at the fundamentals of human existence on their own terms rather than in idealized form.

To what degree is one lying by constantly mustering, no matter the circumstances, an upbeat answer to “How’s everything going?” If the same degree of dishonesty—subtle, widespread, constant—is at work in the notion that life is an “adventure,” with each human fully free and capable of manifesting success, this book is notable for its ability to grasp (and effectively mock) our collective wishful thinking. Frank aims his repertoire of often-hilarious jabs at the artificiality with which culture attempts to pull away from nature.

As in a personal favorite, illustrated at the bottom with only a few simple blades of wild grasses, which reads:

DID NOT HAVE ENOUGH FOOD
AND THE DIARRHEA DID
US IN

The humor is often based on such ironic turns or bald cynicism. At its weakest, the material can echo the pure silly of comedian Demetri Martin’s drawings, or gesture toward morbidity in a way that recalls but is not as daring as the single-panel horrors of Atticus Lish. However, on the strength of its many successful pieces, HEG?NG establishes its own sort of wry bleakness, taking a swipe at romanticism in ways that are surprising, spirited and fun. Moreover, the thematic undercurrent of the book, which suggests a move toward a more immediate and essential reality than our culture tends to encourage, is heartfelt; it is not just a joke when Frank declares, over a (somewhat) realistic drawing:

HERE IT IS
MY BEAUTIFUL
FUCKING
HEART

Reviewer bio: Justin Maki is a poet and editor living in Brooklyn, NY. He studied writing at the University of Colorado at Boulder and in Naropa University’s Summer Writing Program, and spent four years teaching in public schools in Osaka, Japan. He currently serves as an assistant managing editor for the literary translation journal Asymptote and as a web editor for the nonprofit Brooklyn Poets.