Review of Julie Barton’s DOG MEDICINE: HOW MY DOG SAVED ME FROM MYSELF 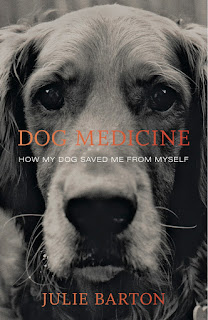 Julie Barton’s debut memoir, Dog Medicine: How My Dog Saved Me From Myself, testifies to the connection between a woman and her canine best friend.  Through memories that contextualize her past, and astrological imagery that conveys the present, Barton tells of her struggle to overcome mental illness.  She describes in detail her innate bond with Golden Retriever puppy, Bunker, illustrating the healing power of human relationships with animals.
Barton intertwines memories and present narration throughout her work, swerving between her 1996 depression and earlier flashbacks.  These juxtapositions give readers insight into the deep-rooted origins of her mental illness.  With scenes of physical and mental abuse from her older brother, Clay, Barton paints a vivid scene.  During a particularly destructive bout of abuse, Clay breaks into ten-year-old Barton’s locked bedroom, “…lunged at [her] on [her] white wicker bed…punching [her] arms and pinning [her] down.”  Clay then carves into her wooden door hurtful comments: “Loser”, “Everyone Hates You.”  Barton recalls, “What Clay thought about me, I thought about myself.”  This self-hatred, “lodged in past experiences” returns in the present, as Barton struggles with depression.

Barton expresses a supernatural harmony between herself and Bunker.  Before their predestined paths converge at a breeder’s rural farmhouse, Barton uses astrological imagery to link her depressive inability to get up off her kitchen floor to her Golden Retriever puppy’s young life: “the second day of Bunker’s life and my second day on the floor, there was a partial solar eclipse…No light for me.  No light for Bunker.”  The celestial darkness both she and Bunker experience begins to fade with a waxing moon the night of their meeting.  Some readers may find these references to the supernatural repetitive.  However, Bunker’s illuminating effect on Barton’s world, mirroring the moon’s increasing brightness, shows the power of their relationship.  This uplifting, yet at times excessive, description of Bunker’s impact on her life provides readers with insight into her motivation for documenting this period.  For example, she writes: “He was feeding me, giving me essential emotional and spiritual nutrients, so I could continue on in my own life”, revealing Bunker’s importance in her recovery.
Barton puts a new spin on dog as “man’s best friend.”  Bunker becomes a woman’s best medicine, and his need for daily care and exercise pulls her from the depths of mental illness.After depression returns her to her parents home, and leaves her struggling to wake every day, Barton finds solace in a playful puppy.  Bunker brings peace as Barton recalls: “The blackness fizzled when I touched this dog, and in its place appeared a quiet calm.”  She regains a sense of purpose as Bunker forces her to get out of bed each morning, requiring her to care for him and thus herself as well.  A heartwarming book, Dog Medicine serves as a tribute to the healing power of animals.  The memoir will appeal to readers who have battled depression and help others understand the struggles of mental illness. (November 2015)

Purchase Dog Medicine: How My Dog Saved Me From Myself HERE.